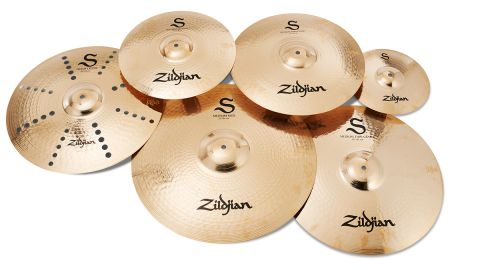 Improving on the old ZHT series, the B12 bronze alloy S Family is a good-looking intermediate level series with a range of weights offering a compelling range of sounds.

From February 2016, Zildjian's new S Family takes over from the outgoing ZHT series.

The ZHTs, launched in 2007, were Zildjian's first cymbals made from B12 bronze alloy, with four percent more tin content than the (still available) ZBT's B8. Now Zildjian has spent two "intensive" years in the Sound Lab making subtle improvements.

The S Family is extensive, with 38 cymbals available individually or in two boxed sets - a Performer and a Rock Cymbal set. For review we were sent the Performer set, comprising 14" Mastersound hi-hats, 16" and 18" Medium-Thin crashes and 20" Medium ride. We were also treated to a 10" splash and 18" Trash Crash, the latter with its 40 radiating spoke holes.

The S Family certainly looks the part with its snaking 'S' logo emblazoned over a gleamingly polished Brilliant finish. As compared with the B8 ZBTs, the B12 S Family has 50 percent more tin and it shows in the more silvery hue.

Medium spaced rippled lathing covers the top and bottom surfaces, and there is intensive, graded machine hammering everywhere except on the bells.

Adding to the family diversity the collection encompasses four weights: Thin, Medium-Thin, Medium and Rock - the latter being the heaviest.

Straight away the 20" Medium ride manages to chalk up several good points. Stick definition is exemplary, with the clarity of a top pro cymbal, quite woody and focused. The bell is a corker and when you crash the cymbal's edge there is an enjoyably deep and effusive roar.

Looking back to our review of the ZHTs in 2007 all these aspects seem to have been improved. And yet hovering above all this there is still the tell-tale electro-zing - a slightly uncomfortable high-pitched mosquito buzz.

"There is undeniably a slice of that funky thin and trashy element to the Trash Crash, but for us the sound is more of a super-thin fast crash."

It's only to be expected, as fashioning an exceptionally good ride is the hardest thing, rides being the most complex of cymbals, requiring the most extensive qualities. Where the 20" Medium's toppy vigour does pay off though is when you move along and up to the bell, which is especially strong, bright and resonant. A shining beacon.

On the other hand, where the thin zing of the ride feels a little uncomfortable is in the way it contrasts with the two Medium-Thin rides, 16" and 18". Being quite thin they both have deep pitches with fast responses.

They are pretty cool cymbals, lively with a sharp edge followed by a surprisingly warm and smooth depth. It's just they are a little cowed by the power and whine of the ride. The heavier Medium and Rock crashes might fare better?

Those latter heavier crashes might very well be more powerful too, as Zildjian claims the S Family cymbals are loud, though when it comes to the Medium- Thin crashes this is stretching the imagination.

As we've seen with other upper-budget lines, like Sabian's B20 and Paiste's PST8, the tone is definitely on the right lines, but the projection is lacking just that bit which the most expensive cymbals have. It's what you pay top sterling for we're afraid.

Inevitably then this reduces the power of the 10" splash. It too has a pleasing quality of tone, but it is not the most cutting or powerful of splashes.

Looking back again to 2007's ZHT review, we see the Mastersound hats were our favourites of the bunch. They are still impressive, but this time they will have to compete with the Trash Crash, more of which in a moment.

The hats have a hammered wavy edge to the bottom cymbal which increases the sharp 'chick' and gives them more sizzle when part-open. Again we feel the S Family version is more mature than the old ZHT, slightly less aggressive, and instead darker and full-bodied.

Which leaves us with the 18" Trash Crash. Don't be misled by the trash description, which is a slight over-statement. Yes, there is undeniably a slice of that funky thin and trashy element, but for us the sound is more of a super-thin fast crash.

A finer and more silvery tone with a smaller proportion of white noise that provides the cheap dinner tray dropped down a stairwell element. Which is meant as a compliment - it's a tasty percussive blast. Regardless of status in the Zildjian hierarchy of series, the Trash Crash would make a colourful addition to any drummer's tonal palette.