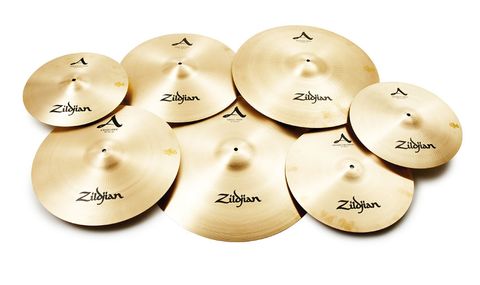 Zildjian has kept faithful to the essence of the A Series cymbals' unmistakable sound, while awarding them with a clearer and brighter top-end.

Ten years from now, Zildjian will be celebrating its 400th Anniversary. Keen to preserve this undeniably rich heritage, this year, its 390th, the cymbal makers are overhauling a range of models, including the A Series. As Zildjian says:

"We    looked at our top selling models, drummer preferences, and musical trends to put together a collection of our best cymbals, sizes and weight ranges, with a diverse spectrum of bright, dark and blended sounds."

So far, updates to the A series include the revision of 20 models, re-release and re-design of three former models and a brand new 23" Sweet Ride.

We have a sizeable selection from this legendary series, including three rides, four pairs of hi-hats, 10 crashes and a crash/ride.

Zildjian's 'Sound Lab' has made slight changes to the profiles or curvature of each model, saying, "We've dialled into the essence of that classic sound and made adjustments to the curvature and weights, capturing the sweet spot of the A Zildjian sound."

Comparison with our old set of New Beats, for example, shows the new shape has a steeper curve, giving it a slightly higher profile. Other changes include a repositioned, larger 'A' logo with the cymbal denomination below and the cymbal size just below that.

While Zildjian has made these subtle changes they are still manufactured in exactly the same way as the previous models; cast from Zildjian B20 cymbal bronze, lathed, hammered, screen printed (with the various black print logos), laser etched with the familiar Zildjian logo into the cymbal surface and finally, left in their natural bronze finish.

All but one of the hi-hats mirror one another with their familiar domed shape. As usual, it's the heaviest of each set selected for the lower. It is the lower cymbal of the Quick Beat hats which is unlike the rest - this sports an intriguing bell-less design and has just the slightest curve to its profile. As well as the centre hole for the pull rod, it has four additional holes designed to reduce suction, hopefully giving a snappier hi-hat action.

Initially we begin by checking out the three 18" crashes, including the two-in-one domination of the 18" crash/ride. Though a crash/ride can be a great space and money saver, after a flurry of strikes, these were quickly swallowed by its large voice and deep dark tone - we actually thought the 18" Medium and Medium Thin crashes did a better job.

As a general rule, the heavier/ thicker the cymbal is, the higher the pitch and the more articulate they become. Pitching the two similar-sized crashes of different weights upholds this theory.

Having heard all of them individually in the 'lab', in the real world, the acid test is to see how they fair in a live performance situation - as if we need an excuse to take them out on a gig! Apart from leaving behind the 13" and 15" New Beat hi-hats we take as many of the crashes as we can muster, making several cymbal changes during the set, when and wherever possible.

The band's line-up is keys, sax, guitar, bass and drums. It's a purely instrumental set-up playing a mixture of genres including jazz and funk, along with some popular crowd-stirring radio/TV themes and film scores.

The band kicks off performing the theme from Pick Of The Pops - 'At The Sign Of The Swinging Cymbal'. The bell of the 22" Medium ride fires up the band and each subsequent stab and accent punctuates with clarity and cut - readily available from any of the selected crash cymbals.

Even in full swing, the Quick Beat hats can be clearly heard, snipping their way through the various instrument frequencies while opening and closing swiftly. For some of the slower instrumentals, we like the effect of playing on the ride while simultaneously producing an off-beat pedal 'chick' on the hi-hat. For this we swap over to the pair of 14" New Beat hi-hats which applies a complementary level of volume while helping to smoothly cement the groove.

The brand new, huge 23" Sweet ride does exactly what it says on the bronze - it is one of the sweetest pieces of cast metal. Within just a few strikes the ride rapidly builds with immense wash as edges wobble and gyrate. While this gives an organic feel to the cymbal and it yields and exudes character, permeating the air with a shimmer of complex sound waves.  

All in all, this is a superb selection demonstrating excellent sound and manufacturing consistency between each model.