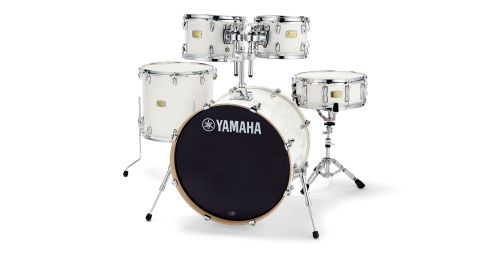 Yamaha's credentials run through this kit like the words in a stick of rock. It's beautifully made; solidly engineered to take the knocks of real life and produces a quality of sound that defies its price tag.

Yamaha first introduced its Stage Custom series in 1995 and in the near two decades since it has made the company's design, build and sound qualities accessible to those on a budget.

Back at the beginning of 2014 Yamaha unveiled an improved Stage Custom package in an effort for it to remain, in the company's own words, 'among the best drumsets in its class'.

Yamaha's track record of building birch shells speaks for itself and Stage Custom drums became 100 percent birch at the last upgrade, over five years ago. The birch is sourced from China, which is where the drums are produced; the standard of manufacture is superb, with every nut and bolt turning smoothly.

These latest Stage Custom shells have been influenced by Yamaha's Oak Custom series' use of thicker plies. Each ply has been increased from 1mm to 1.1mm, making the 6-ply shells 6.6mm thick. Yamaha reckons that the extra wood encourages greater projection.

The shells are straight-sided and butt jointed with Yamaha's distinctive diagonal seams. Bearing edges are carefully cut at 45° - we detect a slight rounding over on the bass drum in comparison to the sharp peaks on the snare and toms.

Adorning the shells is a new lug design originally created for the Absolute series. Authentically low mass, the lugs require only a single screw to fix them to the shell and are spread over the kit in ideal numbers (with the possible exception of the bass drum's adequate but not over-endowed 16).

Also making a first appearance are the rubber gaskets that insulate every metal component at the point where it meets the shell. Die-cast claws are now fitted to the bass drum as well, along with a higher spec spur assembly.

Revised drum depths feature in the new shellpacks and the review kit consists of a 22"x17" bass drum, 10"x7" and 12"x8" toms, 16"x15" floor tom and a 14"x51⁄2" matching birch snare. Five lacquer finishes are available and the Pure White of the review kit is a vision of glossy brilliance.

The first impression we get of the kit is that it's loud - seriously loud. When we unbox the kit we're in the company of another drummer who gladly warms it up while we stand out front. Within moments we're practically pinned against the wall by a barrage of sound.

When we finally manage to gain possession of the drum stool things are barely quieter from behind the kit. Wide open, the bass drum is right on the money, lashing out on cue with an absolute wallop of low end.

With just the integral sound rings built into the heads to rein-in any overtones, it's an unashamedly resonant kick with a breathy decay. A particularly fastidious sound engineer might insist on adding further dampening, but in this unimpeded state, the bass drum's attack, body and natural sustain combine to magnificent effect.

The toms are equally full-on, delivering quick, fat notes at the sort of volume that would require sign language to communicate. Birch shells generally make for focused-sounding drums and the toms quickly tune to a point where this is achieved. With the fitted UT heads they project so well that they sound almost too throaty and subtler dynamics aren't quite so easy to conjure up.

Switching the heads for coated versions takes some of the edge off, allowing a little more warmth to rise in the note. Swapping a second time for twin-ply coated heads softens the response further, rounding out the frequencies while drawing the sustain in as well. In this configuration, they sound studio-EQ'd and way above the price-point.

The snare turns in a typically bright and birch-like performance with aplomb. Tuning variations are taken in its stride, whether tightening to a funky crack or relaxing to an expansive clonk.

The response is excellent, with the wires reacting even when the sticks are stroked right into the edges of the batter head. Like the rest of the kit, it seems unwilling to even acknowledge, let alone admit to, its budget status.