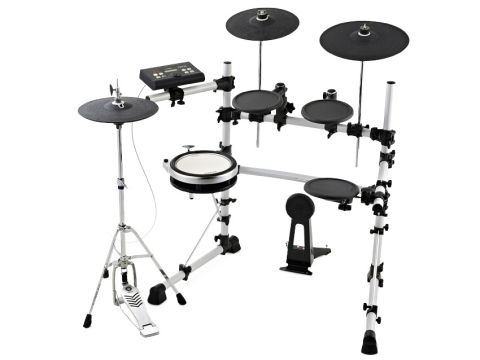 Disappointing play-along tracks aside, the DTX500 is a pretty good-sounding module, making Yamaha's new arrival definitely worth consideration, especially if you're looking for a 'central control kit' for use with external sounds from hardware or software sources.

The lower-middle section of the electronic drum set market - where prices hover around the £1,500 mark - is always a hotbed of activity, typically dominated by Yamaha and Roland. The Japanese corporations are acutely aware of the number of keen amateurs and semi-pro players looking for a decent, affordable practice kit for home use, where this kind of money is justifiable.

The step up to a £2,500-odd set-up is too big an ask for such drummers, but a grand-and-a-half is evidently not too hard to swallow - and kits in this sector have improved enormously in the last five years as features have trickled down from loftier rigs. Yamaha's new DTX550K is a prime example.

"The acoustic kit (modelled on Yamaha's own Oak, Maple and Beech Custom kits among others) are very decent and possess their own distinct characters."

The 'five-piece pad, module and two cymbal' DTX550K array hangs off Yamaha's RS85A rack. We've always liked Yamaha's hardware and this offering acquits itself very well. The light weight of the tubular silver rack means it's easy to shift around, but well-sized tubes - and feet in particular - make for a solid skeleton.

Clamps might be plastic rather than metal, but they exert a very firm grip on their assigned sections of frame, tom holders etc with a distinct lack of movement in the rack.

It's a compact set-up, but the well-judged size of the pads (8½" in the case of the TP65 tom pads, with a 10" snare) ensures that the playing area doesn't feel cramped. Sticks need to be reasonably well aimed if you're coming from a big acoustic kit and used to a 14" rack tom target area, but more accurate technique never hurt anyone.

The XP100SD snare, featuring Yamaha's new Textured Cellular Silicon head, is a welcome addition, as is the RHH135 hi-hat - a 'real/virtual' pad used atop a standard hi-hat stand. There's no beating one of these on a stand that reacts very closely to a traditional hi-hat set-up, and it's a valuable addition here.

This is a great-feeling set-up once it's rigged to personal preference. The large 15" ride and 13" crash pads allow for real playability, and the solid feel from the kick, forgiving snare and convincing hi-hat action add up to a very rewarding, tactile playing experience. But that's only half the story, of course.

The rest lies with the DTX500 module, which is equipped with 427 drum and percussion voices and 22 keyboard (read 'synth') sounds and 41 practice songs. It's a pretty basic, even dated, looking unit, with just eight buttons, a small two-line LCD display and a data dial slapped in the middle.

Thankfully it's a pretty intuitive beast, at least as far as simple functions are concerned, so auditioning preset kits and playing along with songs is achieved without recourse to the manual. Any deeper editing of sounds and effects settings (the DTX500 has 19 reverb types and master EQ) requires a bit of scrolling through pages.

In typical Yamaha fashion, however, the snare benefits from a continuous controller knob, which means instant access to tuning (or other assigned parameters).

Sonically, there's a lot to like about the DTX500. The acoustic kit sounds (modelled on Yamaha's own Oak, Maple and Beech Custom kits among others) are very decent and possess their own distinct characters. There is a little more 'machine gun-ny' response on snare sounds and toms than might be ideal, but largely the sounds are very much in the right ballpark.

And predictably there's a good selection of electronic and percussion sounds on offer, including the cheekily named T8 and T9 kits - can't imagine what these refer to…

The only real downside? The home organ-like song backing tracks. Quite why Yamaha can't mine the rich vein of synth sounds they employ in their flagship hardware synths for the DTX500 is a bit of a mystery.

The DTX550K plays as well as anything in its class. The decision to specify a 'real feel' hi-hat and the lovely response of the XP100SD snare was a very sound move and earns serious brownie points.