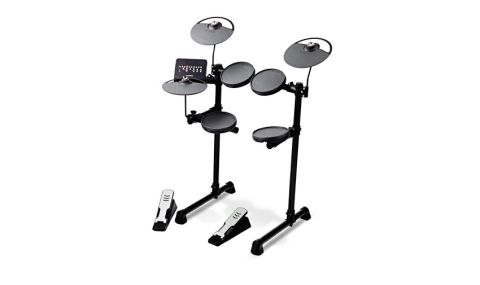 There is a lot on offer here for the price and with the connection to the outside world, it could be the start of something much bigger!

Billed as the perfect starter kit, Yamaha's all-new DTX400K is a no-frills set-up, priced to entice any beginner, seasoned player (for a warm-up/practice), or just about anyone wanting to get into the world of electronic drums. The DTX400K is the latest electronic set up to be indoctrinated into Yamaha's highly successful DTX family.

Centering on an industry-standard tubular steel rack, this five-piece set-up looks to be fairly typical of the many available kits at this price-point. The rack has two vertical side poles, linked by a crossbar, which doubles as the mounts for the first and second tom pads. The third tom, snare/hi-hat and the DTX400 module each have their own mounting arms.

The brackets for the crash and crash/ride pads are made from pre-shaped steel rods, creating a fixed tilt angle for the two cymbals while an L-shaped rod is used to attach the hi-hat pad directly to the snare assembly. However, as the distance between the snare and hi-hat pad is fixed, there is no provision for individual height adjustment.

The newly-developed single-zone drum pads are made from a rubberised compound, designed to be stick resilient yet sensitive enough to give a good triggering response. The cymbal pads are also single-zone, but to add to a realistic performance, Yamaha's 'Accent Articulation' makes subtle changes to the dynamics according to stick velocity.

In common with nearly all electronic kits, the hi-hat pad operates in conjunction with the hi-hat controller pedal allowing the player to use some of the usual playing techniques such as open and half-closed etc. Physically the KU100 kick pedal looks identical to the hi-hat controller but this is said to have been specially designed (without a beater), to give a silent kick operation.

Those with a keen eye will notice the module doesn't have a display - instead, LEDs under each of the 21 push-button controls illuminate depending on which options are selected - having the manual close at hand will be essential until the user becomes familiar with the various options.

The module has a USB socket which really opens up the kit, becoming part of a much bigger picture with integration into any Digital Audio Workstation or DAW (Yamaha suggest Cubase as the centrepiece).

The USB can also be used for connection to an iPhone, iPad or iPod Touch using Yamaha's Song Beat app which, amongst other things, provides a visual representation of the kit, gives several useful practice routines and has a huge range of play-along features.

In addition, there are over 1,000 songs available to purchase, so you are not limited to the 10 onboard tracks.

One of the most exciting aspects of the DTX400 module (in a standalone situation), is access to the many acoustic kit sounds which are derived from Yamaha's own amazing acoustic kits, including those of the Maple Custom and Oak Custom.

There are 10 kits pre-configured, but each of these may be altered, creating whole new kits - there is no reason you couldn't make up your own from any of the 169 sounds - perhaps one with a Maple Custom kick, Hard Rock snare and a mixture of birch and vintage toms.

As the module springs into life we are treated to an LED light show as each button illuminates in a sequence. Selecting a kit, choosing and playing a song or altering the overall volume are the most basic functions, requiring one or two button presses. Getting deeper into the module requires extensive use of the manual until you become familiar with the various aspects on offer.

Considering there is no display, the module is surprisingly powerful - with the raft of training facilities on offer and the song playback with its ability to loop any part of the onboard song is especially useful when trying to crack some outlandish rhythms.

The response from the pads and overall sound from the kit is fairly impressive but the pedals are far better suited to a carpeted flooring. Though the positioning of the hi-hat with the snare is less than convenient, the most annoying aspect is that the hi-hat tends to droop, moving sideways on its round bracket which makes access to the module a pain.

A better solution would have been some knurling on the hi-hat mount, placing the module on a lower mounting and raising up the hi-hat and snare. That said, minor gripes with the set-up didn't spoil our enjoyment of the kit.