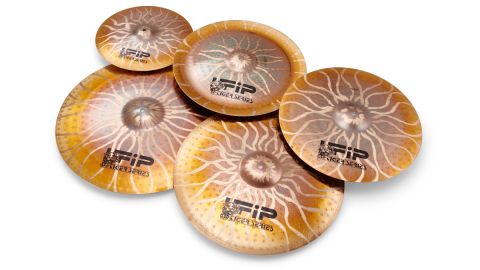 The price of these metals will meet with the approval of your wallet, while the sound and appearance will appeal to the intended genres.

UFiP's cymbal range caters for a variety of music and drumming applications including kit players, percussionists, orchestras and marching bands.

A couple of months or so ago we checked-out an impressive array of its hand-crafted, pro-standard wares. Once again we take a trip to Italy to explore more "Ear created" cymbals, made in the heart of the Tuscan region.

When UFIP was first established in 1931, its cymbals were mainly traded as OEM products for companies such as Premier, Pearl, Ludwig, Slingerland, Gretsch and others - there's a chance you may have previously owned a UFIP without even realising it!

The selection we have for review is from UFIP's Tiger Series and includes a 22" ride, pair of 14" hi-hats, 18" and 20" crashes and an 18" china. The series is aimed at the semi-pro/intermediate player where UFIP's suggested genres are rock, punk or metal.

These models are made from sheets of B8 bronze which are cut/trimmed into round discs and pressed to form their final shape and a relatively shallow profile, which should help reduce overtones.

Though they are not cast models, the company says "they are given the same level of attention, care and hand-hammering that we use in the production of our Professional Rotocast series".

Once pressed, they are subject to a proprietary hardening procedure which contributes to a proportion of their appearance and helps provide a bright fundamental tone.

A proprietary heat treatment awards them with a reddish brown hue and the tiger skin effect is made by buffing lines into the heat-treated bronze surface. Though we think the lines appear more like a depiction of the sun or perhaps giant sunflowers, rather than anything to do with a tiger, they certainly have an eye-catching appearance.

All of the models here boast this finish - evident even on the underside of both sides of the hi-hat cymbals - perhaps this may seem like effect-overkill but some may prefer to put the heavier hi-hat cymbal 'up top'.

Lathing is only apparent on the 22" ride, with the grooves evident on the topmost surface only. Judging by the hammer strikes, the process order appears to be lathing, hammering and then the final random buffed 'tiger' lines from the top of the bell and tailing-off towards the outer edge.

UFIP says that the hammering is performed by hand, although the indentations would appear to be consistent with those made by machine. This is particularly evident by the regular 10mm diameter rings found on underside of the crashes, hi-hat and ride.

We kick off with a selection of gradually increasing hits upon the bow of the 22" ride - rather than building to a saturating wash, it maintains a clear, high-pitched ping, eventually dying away with even fade.

A shoulder clout at the side of the bell produces a penetrating high-pitch 'ting'. This cymbal is so well-balanced that, when left to sustain, there is hardly any motion at the outer edges.

If you are into jazz, here you may be a little disappointed as this cymbal doesn't have the complex characteristics and fullness of sound found in a cast cymbal, but this is great news for metallers!

A glancing slice across the extreme edge of the 18" crash produces all of the usual attributes of a large, powerful crash. It explodes instantly with just one strike and as we hail down a flurry of sideward shoulder strikes, the cymbal retains its cutting frequency.

It's exactly the same story with the 20" which, though pitched slightly lower, has plenty of cut too when required. If you had a small gig with not much room for your bounty of bronze, we think it would be able to act as a very reasonable crash-ride too. There are no markings on the hi-hat to suggest which of the two should be on the top - they look identical but one is only just a touch heavier and slightly higher in pitch.

As is customary, the lighter one goes up top and as we begin to pedal and the two cymbals touch each other we have a definite cupped 'tick' and stick strikes are clear and crisp. Alongside the large crashes, the upturned china provides us with yet another decisive stamp with its tasty, trashy head-turning capabilities.

Again, it is certainly explosive, with the ability to deeply penetrate and a great all-round sonic match with the other Tiger Series models here.