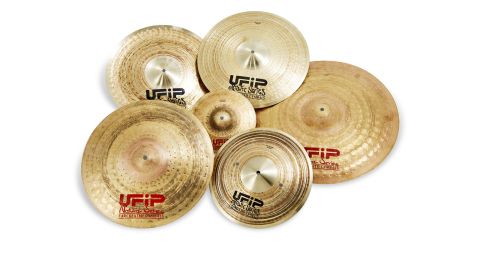 The Extatic range will thrive in a pop environment, but it's also well worth a look for those on the hunt for articulate funk and fusion cymbals.

Cymbal maker UFIP (which when translated from Italian to English can be roughly interpretated as United Federation of Independent Cymbal Makers) may have been around since the 1930s, when it operated as a series of companies in Tuscany, but Brit drummers have often struggled to get their hands on UFIP's wares.

That is until now. Thanks to Reading-based Cymbalise's 2013 launch, UFIP metals are now easier to find than ever on these shores. Here we've got our hands on the Extatic range.

The Extatic line is represented in this review by a generous selection of 14" hi-hats, 16" and 18" crashes, 18" China and 20" ride. Metal are made from B20 bronze and have undergone UFIP's Rotocasting process. This sees bronze poured into a mould and spun at around 1,000rpm.

According to UFIP this aids the removal of any impurities in the cymbal and increases the bell-to-bow ratio of each cymbal produced. The Extatics are then hand-hammered through cross hammering.

On playing the Extatics, it's instantly evident that we're dealing with a different beast to the (previously reviewed) Natural range - these metals would be at home in a pop or rock set, but could also handle funk and fusion.

The crashes are stellar performers. Both 16" and 18" crashes produce a wonderful 'swooosh' when crashed and feature delicate bells capable of some outstanding accents. A smash to the centre of the 16" crash in particular is a joy, especially for pop playing.

The 20" ride delivers a solid, sturdy response with every hit, as well as excellent articulation. The primary overtones though did leave us a little cold, as you're left with a heavy, metallic sound, rather than a warm swathe of noise.

We had a little more joy from the 18" China, which is a little devil when it comes to busting out some quick-fire snare accents.

Finally, the 14" hats quickly prove themselves as solid performers, with just enough power when played close and the option to open them up for a full-on aural assault is most welcome.