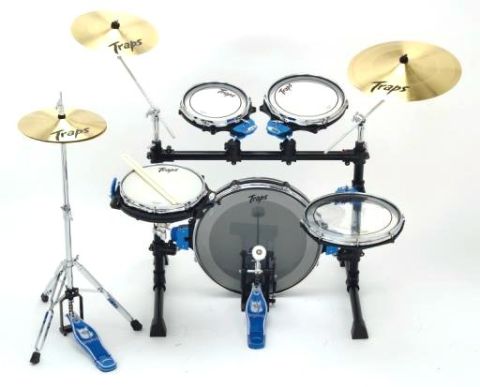 With the supplied cymbals and hardware, Traps makes a bargain starter package. It would also work as a convenient trigger unit for your electronics, and/or as an easily-miked studio tool. It's perfect for practice in confined spaces and for lugging along to rehearsals. Bob Henrit has steadfastly played his Flats (and now Traps) kit on loud rock gigs for years.

Traps, created by Kinks' drummer Bob Henrit and design engineer Nigel Robinson, is the next step from the trail-blazing Arbiter shell-less kit. Henrit and Robinson left Arbiter to create the update themselves.

This led to three main changes. First, the drums are fitted with normal steel hoops and tuned in the conventional manner (as opposed to the Arbiter Autotune single lug concept). Secondly, the bass drum is now double-headed and finally, the snare drum gets a snare tensioner and throw-off.

These modifications mean that Traps functions exactly like any other normal drum kit. Like the Arbiter set, the drums are made from tough ABS plastic in a limited range of sizes - 20" bass drum, 10", 12" and 14" toms and a 12" snare. Unlike Flats, the whole lot is mounted on a single black steel rack frame.

The drums themselves are featherweight, the steel frame heavier, but you can pick up the entire kit together with no difficulty.

The price includes the Big Dog hardware package consisting of bass and hi-hat pedals, snare drum cradle and two cymbal mounting arms. The chain drive pedals are heavy duty with distinctive hinged blue footplates. But there's more! Stool, drum key, sticks and even cymbals are all thrown in. In other words absolutely everything a new drummer would need to get started. There's even laminated photo instructions.

The stamped brass cymbals consist of 13" hi-hats, 14" crash and 18" ride that unfortunately aren't in the same class as the drums. Good only for beginners, the ride and hi-hats are useable but the 14" is pitiable. It would be a shame if the cymbals make people think this is a starter set, because it certainly is not.

To be realistic, there's no way Traps could ever sound exactly like a double-headed kit with proper shells but the sound's actually closer than you might think. Henrit says he asks cynics to listen to a shell-less and a normal kit side by side and maintains they never tell the difference. He thinks that it's what we see that actually colours our hearing.

From behind the kit though, we would maintain that there is a difference, but it's rather less than first impressions. Let's not forget it's the head on any drum that contributes about 80 percent of the sound after all.

You'll have to make up your own mind, but we would urge you not to dismiss the sound out of hand. What's indisputable is that the Traps toms sound like single-headed toms - punchy and fast with a rounded tone and a good amount of depth, only lacking a bit of focus. As an added bonus, these toms are simplicity to tune and won't need any damping.

Traps is fitted with Remo UTs, a budget head made in Taiwan. The kick has a Powerstroke-3 equivalent and the snare a coated Ambassador. The toms have Pinstripes, which are hard wearing, but changing to clear Ambassadors gave the drums even more clout.

The snare wires on the Arbiter Flats snare drum are fixed, which is a major irritant. The Traps snare puts this right. OK, the snare throw-off is a bit Toys 'R' Us, being a big blue plastic hinged paddle, but it works surprisingly well. Snare tension is altered by turning a simple thumbscrew on the butt side and that too works well enough.

The drum produces a bright snappy tone as you'd expect, but by slackening the batter and the snares a little, you can get a surprisingly fat sound which is still incisive with good edge response for delicate ghost work. Rim shots rattle your fillings but cross sticks are a little more subdued.

Many drummers might think about substituting a 'proper' snare but there's really no need, this one's fine. It might be too bright on occasion but it's as good as other snares drums in this price bracket.

The addition of the black logo front head is a massive visual hit, enough to make the minimum depth shell Traps look more like a conventional kit. You have something substantial to hide behind and the whole caboodle feels a lot more stable with double heads and the sturdy rack mounting. One problem with earlier shell-less kits was that the bass drum would topple, twist or slide but because of the way it is mounted, the Traps kick cannot turn or move.

It feels almost as reassuringly static as a normal drum.

A bit of judicious tuning (try tensioning the front a bit higher than the batter) and you are rewarded with a good slap and decent depth. Again, at first you might not think it sounds like a full size drum, but you soon get used to it and, from the next room, it's hard to tell the difference. As an added bonus, the feel of the pedal is much improved by having a front head which allows the drum to breathe and improves rebound.

There's no need to cut a front hole - the lack of shell depth means you're unlikely to need any further damping and you could always lay a towel against the bottom of the front head if really needed.