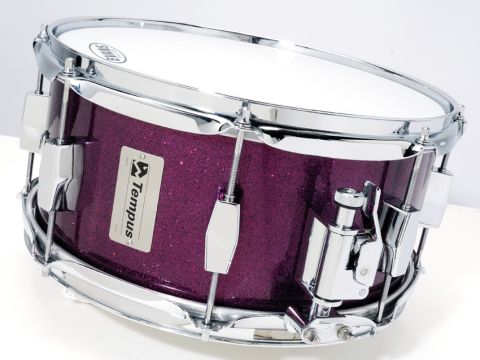 Fibreglass and carbon-fibre are both especially hard and give you clean, bright and versatile drums. The carbon-fibre drums are about 15 percent dearer, slightly darker, warmer and drier toned. All are well worth checking out.

Tempus started out in 1973 as Milestone Drums in Vancouver, Canada, at the height of the synthetic shell craze of the early '70s. Paul Mason acquired the company and renamed it Tempus in 1985.

Today he makes snares and complete kits to order in fibreglass and carbon-fibre. Paul cannot afford official endorsees, but many successful drummers have Tempus drums in their collections, including Manny Elias (Peter Gabriel), Lewis Nash (Branford Marsalis) and Jim Keltner.

"I believe my shells are the thinnest non-metal shells in the world, and they never need reinforcing rings,"

Tempus is now distributed in the UK by Tiki Drums of Hove. Of the three snares reviewed here, two - the 13"x6" in Garnet Glitter and the 14"x7" in Tangerine Glitter - have carbon-fibre shells, while the 14"x5" in Gold Glitter is fibreglass.

Tempus has its own distinctive look with bespoke, die-cast lugs (dating back to Milestone days) and vertically mounted badge. The strainer is Dunnett's clever R-class which features a throw-off lever you can swivel through 180 degrees.

The three snares are all finished beautifully in deep glassy glitters. I asked Paul Mason if he could match an existing kit for drummers who just want to buy a snare. "Not really," was his honest reply.

"Though I can get close if the finish is fairly standard, like gold glitter. Plain finishes are made the same way as the glitters: pigment (rather than metal flake) is mixed with a gel, catalysed, sprayed and left to cure, after which I build the shell into the finish."

Because the finishes are bonded to the shell they are exceptionally durable.

Visually you'd think the drums were normal wood drums. Take a peek inside though and you find amazingly thin shells. Mason says, "I believe my shells are the thinnest non-metal shells in the world, and they never need reinforcing rings." All shells are seamless, hand laid in cylindrical moulds; "like building a kayak or a hot tub".

By our measurements the carbon-fibre is an amazing 1/8th" (3mm) thick and the fibreglass just a teensy bit more. "Bear in mind these shells are entirely hand-made (my hands, as it happens) and so exact tolerances don't really apply," comments Mason.

The insides of the two carbon fibre shells are black, lined with a honeycombed carbon-fibre cloth. This is in complete contrast to the gold glitter Crystallina fibreglass model which is translucent - from inside you can see the outline of the lugs.

Because the shells are so thin it's not practical to have the usual 45˚ bearing edges. Instead they are slightly rounded. Tempus fan Gordy Knudtson (Steve Miller Band) likens the profile to "the long end of an egg".

The bearing edges are some of the smoothest we've seen. They're almost pointed, but not so sharp as to cut your finger or slice your heads.

We tried the gold fibreglass drum last and it turned out to be fractionally brighter and more resonant than the other two. But then it is a standard size (14"x5"), wider and shallower than the others, so you'd expect it to be snappier. The carbon drums though do have a slightly darker timbre.

Both types of super-thin hard shell, with their narrow bearing edges, deliver pinpoint definition and fabulously responsive outer perimeters. Light press rolls and ghost strokes are easily achieved and sweet toned. Wallop the centre and the impact is sharp, yet fat, with an echoing resonance from the shell. This means rim shots elicit a brilliant clang and we had to dampen the fibreglass drum a little.

The response at about one third of the way in from the rim was livelier and had more body than the usual fairly thin sound.

While suitably impressed at home, the only way to really know a drum is live and we gigged the carbon 14"x7" and the fibreglass 14"x5". Both had plenty of power, but exceptional sensitivity.

The synthetic shells are so dense that while they resonate freely they also impart a pure, in some ways hard, character. There's a wide-open clarity to the fibreglass, which felt more extreme than wood or metal.