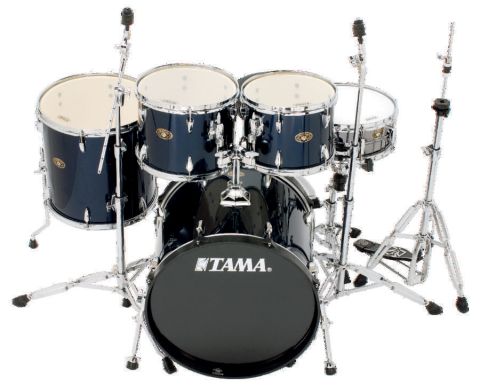 The clincher here is the black nickel snare drum and that there are more thoughtful little hardware details included with this kit than on any other at this price. There's plenty to tempt you with without having to exaggerate.

With Stewart Copeland back on tour with The Police, nearly three decades after the band's heyday, it's timely for Tama to revive the Imperialstar line. That's what the hugely influential drummer played first time around.

Stewart's Imperialstar was Tama's second-string kit back then, while today's Imperialstar is Tama's entry level kit, taking over from the Swingstar. The kit is made in Tama's brand new Evergrand factory in China and represents a major overhaul.

Swingstar shells were eight-ply Philippines mahogany, while the new Imperialstar shells are poplar - a whiter, tougher wood. Sometimes budget shells are rather thick, making up for poor quality. But these poplar shells are a lissom six plies and 7.5mm. The interiors are smooth and the edges fair - a quick rub with fine sandpaper and a sliver of wax polish and they'll do nicely.

On the outside you've a choice of five wraps in Vintage Red, Bronze Mist Metallic, Midnight Blue, Black and Platinum Grey - virtually unchanged from the Swingstar. The review kit is Midnight Blue, which again recalls the Imperialstar Copeland played back in the day. This won't mean much to most 15-year-olds, but the black nickel-plated snare will - how attractive is that to a young drummer looking for their first serious gear?

Completing the overhaul, the lugs - although the same design - are 10 percent smaller than on the previous Swingstar, helping the slightly thinner shells to resonate more fully.

Fitted with decent Taiwanese batter heads, the toms have a warm tone, only a touch less focused than high-end maple or birch. The bass drum heads have perimeter muffling rings, as is the trend today. The result is a big, booming sound with all the depth and power you would want. A bit of internal padding will take away excessive reverberation and boost the thud.

The sexy black snare has a thin steel shell and eight bridge lugs, a basic but sturdy strainer and even black ribbon straps for the 20-strand wires. A plastic sheath thoughtfully stops the strainer from clicking when you switch it on. The drum is sharp and loud, with the usual steel character of dry in the centre but extra pingy at the edges.

Because the shell and rims are quite light the sound is relatively dark. It comes alive when you rattle off rim shots or cross-sticks.

The bass drum boasts another Tama exclusive: Accu-Tune hoops, made from moulded glass fibre reinforced plastic (GFRP), which are lighter but more rigid than wood. These are not new but they're a thoroughly good thing. More scratch resistent than wood they're also a real improvement on the metal hoops that used to blight cheap kits. There's a special indentation where you attach your bass pedal and, instead of hoop claws there are eyelet holes for the drum key-tensioned rods.

Also unique to Tama are the bass drum spurs. Yes there's a rotating bracket like most others, but the spur rod itself is detachable and slots into a new, calibrated sheath. It's different, but we're not convinced it's better since the spur can drop out more easily.

The Omni-Sphere tom mount is 'V'-shaped so it cradles the two top toms snugly together for ease of playing. The 'L' arm brackets though prevent any great sideways adjustment. You can swing the toms in and out by around 90º, but you can't move them closer to you.

The revamped Stagemaster hardware package includes a tool/throne. The Swingstar also had the stool but at the expense of one cymbal stand. Now there are two cymbal stands, a straight and a boom. One aim of the double-braced stands is to eliminate noise. To that end, there's a rubber cap at the end of the upper stand tubes plus a nylon sleeve underneath the stand bases, eliminating rattling and swaying.

Instead of the usual geared bracket, the snare stand has a continuous tilter. This type works because you can get exactly the angle you want, which is impossible with geared tilters. The support arms have 'escape claws' - rubber support cushions which 'float'on the steel arms - for improved resonance and reduced arm fatigue. Great idea, painfully contrived name.

The hi-hat foot pedal rotates around its tripod base for flexible positioning. The bottom cymbal cradle and felt are both fixed so they can't get lost. And the tilter has a locking nut for stability.

When packing up you unscrew the centre pull rod, turn it around and slot it into the top section tubing so it won't get bent in your crowded traps case. Full marks to Tama for addressing these familiar problems.

Finally, there's the HP30 kick pedal, previously included with the Swingstar, but still advanced for this level. It not only has the usual spring tension adjustment but also beater angle adjustment. There is also a spring tension lock. With hard playing your bass pedal spring sometimes works loose, but this pedal has a specially shaped Spring Tight nylon locking nut to prevent this. The pedal also now comes with a double-sided nylon/felt beater.

Tama says: "This time we upgraded everything", which is a slight overstatement, but you get what they mean. The Imperialstar still has many Swingstar features and there's nothing wrong with that. But there really are some big improvements, including the thinner, harder, poplar shells and the improved Stagemaster hardware.