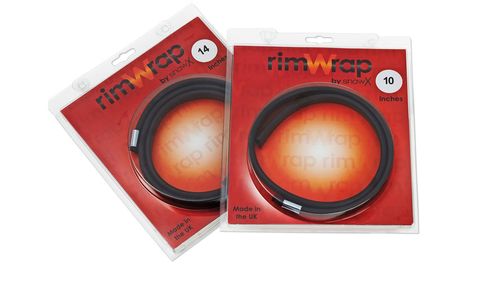 Rim Wraps are an effective practical solution to a frustrating and age-old problem.

There are few phrases which strike genuine fear in the hearts of drummers. 'Copy this Neil Peart solo,' perhaps. 'You're tech-ing for Ginger Baker,' almost definitely. But there's just two little words that can stop any sticksman worth their salt at 50 paces - 'rim rash'.

Walk into any rehearsal studio and you will more likely than not find this dreaded drumming occurrence in spades. Caused when tom hoops rub against a bass drum, it can make your kit look pretty darn horrid in a heartbeat. Shaw has produced the rim wrap in an effort to curtail this problem (and one or two others) for good.

Available in sizes from 8" right up to 18", the rim wraps are, in a nutshell, circular pieces of black rubber. Let's not beat around the bush, the rim wrap is not the most exciting product to look at that will ever feature on these pages. No, unsurprisingly they look pretty uninspiring, but we must remember these are functional and potential kit savers, so how do they perform in the field?

On putting the rim wraps through their paces we decided to put them into the home of rim rash - our local rehearsal studio. Installing the wraps onto our kit was a little fiddly at first, but by the time we'd got to our floor tom (we're installing wraps on a 10", 12", 14", 16" kit) we were more than comfortable with the knack of putting them into position.

Once in place we give the wraps a thorough test and notice that yes, it can't be denied, they do offer substantial protection against toms rubbing against (or even worse flat-out dropping onto) the bass drum. We also notice that installing the wraps to the batter side of our drums safeguards our sticks from being chewed to bits by misplaced shots hitting the rim of our drums.

However, the real test comes when we leave the wraps in place for a week-long stint on kits taking frightening amounts of punishment from a revolving cast of tub-smashing metal merchants. On our return we see some pleasantly surprising results. The kit remains in good nick, the wraps are still in place and the rehearsal room's bass drum has not a mark on it.

Now, if someone could just invent something that stopped guitarists jumping on the kit the second we leave the room we'd be in rehearsal studio heaven.