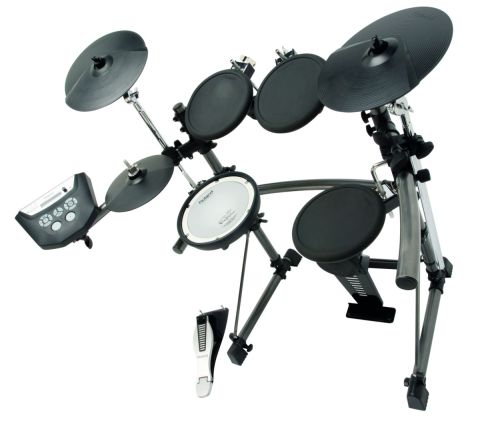 It's always a joy to spend time with TD kits because they are never anything less than beautifully designed and fun and inspiring to play. The TD-6 continues to fly Roland's flag with aplomb. If you're even slightly tempted by the idea of owning one, make sure you can afford it, because a casual trial will have you battering the plastic in no time.

We're big fans of Roland´s TD electronic drum set series, but there are issues with the offerings at both the top and bottom end of the range.

The flagship TD-20K is utterly fabulous but costs the same as a car, and the entry-level TD-3 is a truly excellent tool but it is primarily a practice and rehearsal setup, and not quite fully functioned enough to satisfy the demands of serious performance.

None of this is really a problem, merely the result of some well-placed product differentiation. And the company caters for drummers who want something between the stripped-down TD-3 and bells-and-whistles TD-20 with the kit here - the mid-range TD-6KW. The ‘KW´ means this is a new version of the TD-6KV, which adds a couple of valuable features to further sweeten the appeal of a highly rated set.

There´s no arguing with the fact that the TD-6KW is a handsome set-up - and a thoroughly ergonomic one at that. The grey/black MDS-6C rack (one of the aforementioned new features) is very moody looking, and fantastically easy to rig after the initial set-up. Cymbal and pad holders simply fold out of the way and the whole lot collapses into itself. We reckon we had the whole package set and ready to fit pads in less than two minutes, which is impressive.

The rack is perfectly robust too. The clamps might be plastic, but there´s plenty of torque available from the big old wingnuts to ensure that you can set and forget.

The TD-6KW is a relatively compact setup (something that counts strongly in its favour), but there´s still scope to tailor the positioning of pads to suit, unless you're a gorilla-armed type with the legs of Jimmy Krankie. The TD-6KW gives away its affordable nature with features such as the simple, rack arm-mounted hi-hat pad - more upmarket types now come with hi-hat stand-mounted units - but this doesn´t make for too many playing compromises.

Ultimately, you're best off approaching this kind of rig differently than you would a regular-sized acoustic kit and adapting accordingly. This done, the TD-6KW will make you feel at home right away.

Part of this homeliness is down to the upgrades bestowed on the new kit over its predecessor, namely the bigger CY-5 dual-trigger hi-hat pad and mesh-head PDX-8 snare. The CY-5 might be on the rack itself, but it plays nicely with the FD-8 hi-hat controller pedal, and while it doesn´t try to emulate the feel of a pair of real hats, it does enough to be perfectly satisfying.

The PDX does more to get close to the response of an acoustic drum and is an ideal improvement on the previous TD-6. The head can be tensioned, and although a bigger pad would further add to the natural feel, the PDX works just fine in this context.

It's difficult to review a Roland TD kit without harking back to the company´s glorious electronic percussion past. But it's always been at the forefront of such developments, which is why it´s hard to escape the perception that the firm´s gear has a head start over competitors in terms of sonics. Add that to the fact that Roland´s general sound synthesis credentials are second-to-none (as evidenced by the success of its all-conquering JV and XV ranges) and it´ll come as no surprise that the TD-6KW is a particularly impressive performer in terms of tone. In fact, it´s ace.

In partnership with the TD-6´s complement of pads, all of which are dual-trigger devices, the kit is extremely expressive for such a well-priced setup and even straight-ahead acoustic kit presets are wonderfully natural-sounding. From the off, kit number one - Rosewood - impresses with a lovely ‘bloom´ to the kick drum, deep toms and a crisp, full snare, and scrolling through the rest of the stuff on offer reveals the majority to be highly rewarding to play.

This really is a setup you can totally lose yourself in. Inevitably some of the presets are better than others (we´ve yet to come across a metal kit that quite does the business, for example) and those with lots of hands-on experience with real tablas and brushes will find the TD-6 offerings approximations rather than accurate emulations, but in the main it is an immensely accomplished collection of noises.

In terms of functionality, the TD-6KW doesn´t disgrace itself, although the way in which it works is limited by the fairly small LCD screen and increment/decrement buttons. In an ideal world, we'd be working with a data wheel and huge, full-colour HD screen, but such trimmed corners are no biggie considering the cost of the rig. Basically, there's a little more squinting, menu-surfing and button pushing required here than on the TD-20, but there´s still an awful lot of tweaking and editing available in the TD-6 module.

Custom kits can be created, sensitivity of pads adjusted, pitch and pan altered and ambience fiddled about with. This last feature allows the user to change the sound of the kit as a whole by selecting different virtual settings for the current kit - options include studio, living room, bathroom, garage and stadium types - and it´s a great feature that alters the basic character of the sound in subtle (or not so subtle) ways.

Once you´ve exhausted all your options in terms of the stand-alone kits (something that will take approximately 12 years, we reckon), you can spice up your life by playing along with the TD-6´s backing tracks. Always something of a mixed bag, some of these are pretty good, although everything from the rock and shuffle to r´n´b and electro tracks veers toward MOR versions.

But as practice tools they serve a valuable purpose and, with the exception of a couple of rather over-optimistic presets (the heavy rock stuff in particular comes with a good helping of free cheese), they´re certainly not so naff as to force you to turn them off after 30 seconds for fear of hurling the module at the wall to cease its noise pollution.