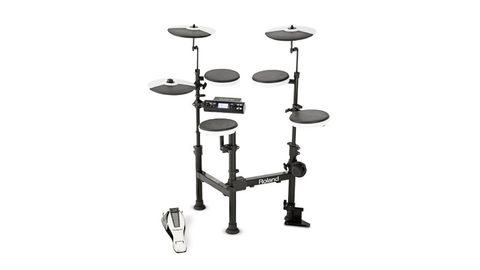 This kit offers full portability (and is therefore incredibly easy to transport), with little compromise - it is also easily stowable, which will appeal to those not wishing to fill up their valuable space with drums - the rack design could well set a new trend.

The last year has witnessed a huge leap forward in music technology, not least with Roland's stunning SuperNATURAL sound engine with Behavioural Modelling. While this achieved a near-acoustic playing experience on an electronic drum set - no e-wares produced by Roland (or in fact any other manufacturer), were designed specifically for portability.

On the acoustic front, however, with portable models such as Yamaha's Hipgig, Pearl's Rhythm Traveler, Taye's Go drums, Alchemy's Traps A400, we were spoilt for choice.

For review we have the brand new Roland TD-4KP - a five-piece set-up, complete with four drum pads (similar to those on the HD-3), three for the cymbals, hi-hat controller and a small pad ('borrowed' from a KD-7), for the kick - all fairly standard stuff, so far.

So, what makes this set-up so different? Well, its unique rack design allows it to fold down to around half its playable size - small enough to stash in a cupboard/corner of the bedroom or, for a gig or rehearsals it could sit next to you on a bus or in between passengers on the back seat in a small car!

The rack comprises three round vertical tubes linked to the centre by two square- shaped tubes. The two opposing ends telescope into the lower rack portion, along with the cymbal arms, which also fold inwards/downwards, so the cymbals then become vertical, with the other pads and module following suit. Once it is 'folded', everything (including the hi-hat, bass drum pedal, sticks etc) can be slipped into the optional gig bag.

To partner this unique rack system Roland chose the V-Drum TD-4 module, as it is light and compact but capable with a wide range of quality sounds. It comes with 25 pre-programmed kits which may be user-tweaked (or entirely changed), with adjustable parameters such as tuning, dampening, ambience and voice. While the TD-4 doesn't have the latest SuperNATURAL processing, it does feature COSM sound modelling for a pragmatic performance.

As the kit would normally be packaged within two boxes, a first-time set-up involves attaching the pads, module, cabling etc, to the rack. However, the pre-erected kit was kindly hand-delivered by Roland's Drum & Percussion Product Manager, Jules Taberrer- Stewart.

Having offered to help lift the kit out of his car, we were given the job of carrying the kit within its soft case, while Jules carried two packaging boxes. Realising that he had actually given us the complete kit to carry (while he was carrying two empty boxes!), we were amazed how light the whole set-up was.

With each component attached - the whole kit emerges out of its case, extending the telescoping rack tubes and unfolding each piece a bit like a Transformer. When fully 'unfolded', the rack forms a rather apt 'V' shape where it stands stable and surprisingly sturdy.

We must admit that we were thinking 'how weird, the snare is perched in the middle on a pole and the kick is way over to the right on another!' - having played the kit for only a short while, we have to admit, the positioning feels surprisingly natural. The TD-4 interface is fairly basic, but, as a result, is also incredibly intuitive - so it didn't take us long to become fully acquainted.

The 25 kits comprise a mixture of excellent live and recording sets, electronic EastEnders-type sounds and a choice of percussion. There are no onboard songs to play along with but the module does provide a mix-in jack to input your favourite audio source and jam along.

It does however feature a coaching facility which is not only great for a beginner, but also useful for a player of any level to help with a pre-gig/rehearsal warm-up. Another notable feature is the quick-record function which (at the press of a button and the whack of a pad), starts recording a performance - great for analysing your playing. Once the machine is turned off, this data is erased, leaving you with the pre-recorded demo when next powering-up.

Blitzing around the whole set showed no noticeable latency and we actually thought the triggering response was really good, though (as we found with the HD-1/HD-3), warming to the feel of the pads takes some getting used to.

With chokeable cymbals (including the hi-hat!) and dual-zone cymbals, creates additional elements of realism - the option to purchase a mesh snare pad would add extra functionality without necessarily adding much weight to the set-up.