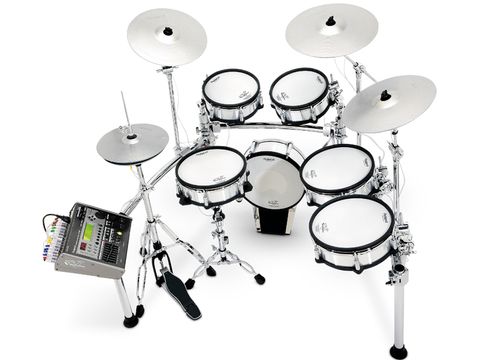 What at first might appear to be cosmetic tweaks in fact add a great deal to the feel and functionality of the set-up. It might be getting boringly predictable, but it's another V-Drum victory. An amazing top end electronic drum kit.

Even given the pace of change in the electronic drums market you might be surprised to see a 'new' Roland TD-20 electronic drum set. It is, after all, only a year since we played host to the last TD-20 related review, that of the TDW-20 expansion card. Well, don't get too carried away - this latest incarnation (unveiled at NAMM 2010) does indeed boast some significant new features, but at its heart lies the existing TD-20 module, albeit upgraded with all that the TDW-20 has to offer.

So is this a case of simply tarting up an old kit to squeeze the last few sales out of it, or a really worthwhile improvement on what always has been a truly superb set-up?

There's never been anything to complain about as far as the construction of the TD-20K is concerned. The flagship V-Drum rig has always been robust enough for demanding professional use - from regular studio gigs to the rigours of the road.

But there is, evidently, always room for improvement, and one of the most noticeable new TD-20KX features is the really rather sexy MDS-25 rack on which everything is built.

The new rack does away with the two-tier front section of the original, instead mounting the tom pads on traditional ball-and-socket tom mounts. It's an immediately cleaner looking set-up, thanks enormously to its chrome finish. It's funny, but in comparing the new kit to the rest of the (admittedly accomplished) V-Drums range, the impression is one of less 'gadget-y-ness'.

We'd never demean the rest of the line-up by describing them as gadgets - from the TD-4 up they all feel like modern instruments - but there's something about that 'proper drum kit' chrome look that really lends presence to the 20KX.

Also impressive is the huge and weighty new KD-140 V-Kick bass drum (pictured above). The new 14" pad replaces the 12" KD-120 of the standard set-up and contributes a very anchored feeling to the kit as a whole. This is a truly hefty piece of gear, and suitably serious looking legs mean that even the weightiest foot isn't going to move it anywhere. Unsurprisingly, that extra couple of inches also has an effect on the general feel too - if you're someone who tends to bury the beater, there's a little more 'real feel' to enjoy.

Amongst the other physical updates to the TD-20 are the KX's swish silver pads and 'cymbals'. The pads themselves are the same as the original, but the snare and tom pads now come with a brushed aluminium-look wrap finish. Should you feel the need you can swap the wrap by removing the head/hoop (another KX innovation), although it's sufficiently swanky as it comes, so we're not sure the extent to which users will be driven to do so.

The optional CV-20KX blue and red covering packs aren't as visually appealing to our eyes… we weren't convinced of the need for the new silver cymbal pads initially. Under normal interior lighting they don't necessarily add a great deal. But it's a rather different story when viewed with stage lights.

The use of the old black pads would have resulted in an entirely unbalanced look now that the frame and drum pads are silver and super-reflective. So on, ahem, reflection the new finish is the right move.

When you get to this kind of level, the devil really is in the detail, and the TD-20KX doesn't let itself down. To match the look of the rest of the set-up, the cabling (all of which runs internally as far as is possible) is all silvery see-through, there's no ugly black snake to distract or detract from the beauty of the kit.

The original TD-20 module remains a phenomenal music-making tool and the expanded TD-20KX simply builds convincingly on that foundation. It's no surprise really, given that it benefits from the TDW-20's goodness too - the expansion card was always so much more than just a few new sounds thrown together.

For those unfamiliar with the latter, new acoustic kits like ControlRoom were fabulously rewarding to play, but it was features such as Kit Resonance (where overtones from the constituent parts of the whole kit come into play when a pad is struck, adding a tasty organic edge to acoustic kit settings) and improved dynamics that added up to an even more playable package.

The TD-20KX has all that, right off the bat. And so it's the most fully-featured, rounded V-Drum kit so far. It's the quality of the 20 'series' that impresses most, but the quantity of sounds and functions is not to be sniffed at, either. While this would mean little if they were sub-standard, their usability is such that the scope of the preset sounds and kits adds to the desirability of the range-topper.

The KX brain is host to nearly 1000 instrument sounds and 100 preset kits, so even before you delve into personalising the brain you're likely to encounter built-in 'building blocks' that are close to what you're after. And of course the level of editing available to those with a penchant for sonic-shaping is world-class.

From new compression algorithms and ambience settings to the ability to alter shell depth and material, add sizzle to rides and on and on, the TD-20KX firmly establishes itself as the most flexible studio or stage partner available. As with all higher level V-Drum offerings it repays patience and time spent learning the depths of its editing procedures, but the huge display and well-designed interface make all that a pleasure, not a chore.