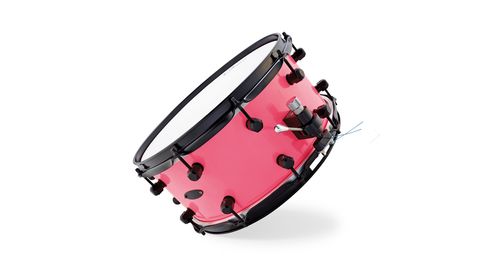 Buy this drum and you've not only bought a killer custom snare, but have helped raise money for a good cause too!

"It's, er, very pink," said the guitarist. "It is indeed," agreed the bass player, as they tuned up. "Wossat then?" asked an avuncular audience member during the break between sets.

It's safe to say the Rockett Drum Works 'Breast Cancer Can Stick It!' snare draws comment wherever it goes - and that has to be a good thing, helping to raise awareness of the continuing fight against breast cancer.

This drum is a product of the partnership between Poison drummer Rikki Rockett's Rockett Drum Works (RDW) and April Samuels, a Texas-based freelance drummer. Samuels, an RDW endorser, was diagnosed with breast cancer in 2010 and following her diagnosis she came up with the motto "Breast Cancer Can Stick It!" which developed into a brand that can be seen on shirts, water bottles, bags, bass drum heads, and cars across the United States.

Her charitable foundation is working to raise awareness and funds for research, clinical trials and ultimately, a cure for breast cancer.

Yes, it is very pink. But the colour of the shell arguably draws your attention away from the other fine details of the drum. The snare shell is solid spun aluminum, and is fitted with RDW's standard single point lugs. DW True Hoops, Trick 3 point GS007 throw off and Puresound snare wires come standard on the limited run of 10 custom drums.

The fit and finish are great, showing the custom work qualities that RDW have become known for. The Trick strainer allows for a wide range of adjustment, and the lever remains one of the most tactile pieces of design ever to end up on a drum.

Out of the box the snare is tuned low, with a fat slap backbeat. The Aquarian Hi Velocity batter has two plies of 7mil film and a dampening rear dot, so is a pretty heavily dampened head, restricts any overtones and seems to have a preferred tuning range, which seems happiest at a medium tension.

Swapping it out for a coated single-ply head opened up the available tuning range considerably, adding in high overtones and a metallic bark. Rimshots are mighty and playing near the rim gives a reggae/punk note that cuts through in the same way as this drum stands out under stage lights. It's not going to win any prizes for subtlety, but that doesn't mean it's restricted to playing two'n'four in a rock band - it proves surprisingly versatile during a function gig.