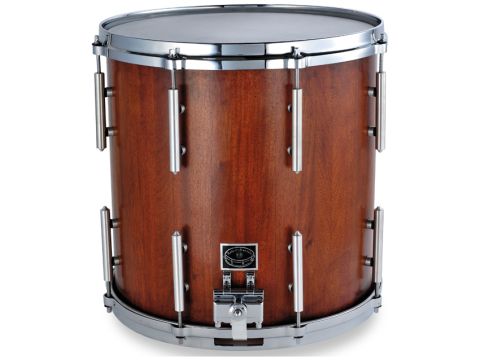 Obviously there are few willing or able to pay such a sum. But for anyone out there looking for a unique, bespoke instrument, Robert's your man.

Robert Daniels is probably unique in that he only makes a drum or two each year, all one-offs for speciﬁc clients.

This mahogany monster was requested by folk superstar Eliza Carthy, who wanted a "gi-normous" deep snare drum with a military feel, but without snares under the batter head.

"Once upon a time we had two Victorian mahogany doors at the farm, now we have only one," says Robert. The Brazilian mahogany shell is nominally 14x14" and is of stave construction, which is Robert's usual method: "Hand-planed and rub-jointed, absolutely no dowels or biscuiting, just timber glued together then turned on a lathe."

Each stave is an inch wide, so there are over 40 of them, but the joins are so tight it's extremely hard to see them. The resulting massive shell is around 3/8" thick, the deep red-brown mahogany furnished with four coats of ﬁnishing oil varnish, then two coats of beeswax.

Robert's bearing edges are unlike anyone else's - lasciviously curved, starting at the sharp outer edge then smoothly arcing over to the vertical inner wall.

As for the air vent this is a large, 1"-diameter hole, again with Turner, a model-making precision engineer. They consist of 4"-long, ½" diameter solid tubes of aircraft-grade aluminium.

Each lug has twin-point aluminium spacers calculated to bridge the gap with the under-sized shell - it is in fact exactly 13 and eleven-sixteenths of an inch in diameter, and perfectly round by our measurements.

The throw-off is a Dunnett and the hoops are eight-lug chromed die-cast, supplied by WorldMax.

To play the drum, we placed it on a stand and approached it standing up. Dimensions-wise it's a ﬂoor tom with a snare on the bottom.

Instinctively it felt right to tune the batter low for that grungy, historic-military type side drum tone - the ominous, loose rattling roll heralding a battle or public execution.

For this, you need chubby sticks with big acorns, with your double strokes wobbling unevenly on the batter. In that sense, it is authentic and no doubt fulﬁ ls its role in the gritty world of Eliza's evocative folk music.

Tuning it higher, more like a modern marching drum, the snares respond quicker and yet the batter head is so distant from the bottom you still hear the stroke and then the tight snare response fractionally afterwards, while the shell emits a resounding ring.

After much consideration, we're giving Robert's Fine drum three stars, because it's such a specialist instrument, and of little use to most drummers.

It is - and is intended to be - a unique and beautiful object. And the expertise and devotion that have gone into building the perfectly circular shell are exemplary.