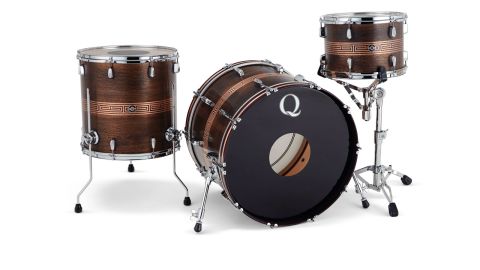 When we have several top class scratch drum builders in the UK this writer is often at a loss to understand the attraction of US custom drums imported at great cost which are often simply blinged-up Keller shells with generic hardware. There are exceptions though, like SJC drums - and now SJC's UK importers, Colchester's Sound Attak, present this copper kit by the Q (for 'Quality') Drum Company of LA.

Although Q offers kits in maple or mahogany, it's the metal kits, made from sheet steel, brass or copper, that draw the headlines.

Scot Lewis of Sound Attak says, "We have known Jeremy Berman, Q's owner, for a long time. In 2000 he was the main craftsman at Orange County Drums and Percussion. As OCDP's UK agents we would see him every year at the NAMM show.

"Last year we were blown away by the copper and brass kits and plate snares, and, more importantly, by the sound. This is not your normal custom drum company, this is totally unique."

"He brings a lot to the table and has been pivotal in helping the company grow," says Jeremy. What we have for review is a Copper Kit with Custom Dark Brown Patina and Aztec Brushed Copper Design.

We don't recall seeing shells made this way before. The thin sheet copper is simply bent round into a circle, overlapped by about an inch and then joined by a double row of rivets.

On the outside the copper is doubled over at the join to present a rounded rather than a sharp edge. This makes it stick out rather noticeably and at the bearing edge it has to be filed down in order not to jut into the head collar.

The result has been described as an industrial look and it is certainly eye-catching. The shell material is, according to Jeremy,

"24oz copper (0.032" gauge) which is sourced locally in flat sheets. We roll them, rivet them, add the [maple] re-rings and finish them all in-house. Nothing is outsourced."

Firmly fixed inside the top and bottom edge are 10-ply reinforcing rings of maple: "The re-rings are Keller, shell blanks that we cut accordingly."

These maple rings provide the bearing edges, which means you are actually playing on the maple edge, more than the copper. The edge is 45° with a clean round-over on the outer two plies. Bearing edge quality is always a good indicator of the care taken in manufacture and these edges are purringly smooth.

The metal-wood combination seems to work structurally as the drums are impressively round - the 16" floor tom was almost perfectly circular, which is a rare thing. Inside, the shells have a golden- copper burnish. Lugs are secured with high quality bolts with steel and black plastic gaskets.

The shells are finished in a mottled Dark Brown Patina with a centre brushed copper Aztec pattern. The Aztec design has the same finish as the insides of the shells and this is also used in the inserts to the 12-ply maple bass drum hoops. Jeremy explains,

"We offer all sorts of finishes for our metal drums. Most popular is classic brushed satin. We also use chemicals for various patina finishes. We can actually patina images and patterns onto the shells. It's not a paint, it's a controlled oxidisation of the metal."

For the chromed hardware, Q, like most small companies, must turn to familiar generic fare - classic Slingerland- style 'beavertail' lugs and standard spurs and floor tom legs. Although the shells are copper they are not that much heavier than a normal good quality wood-shelled kit.

Yowsa! The bass drum! If ever there was a time to dig out the old chestnut 'sounds like a cannon', this is it. Thin metal shell bass drums do have an obvious tendency to be resonant and bangy, more so than wood. The nice thing about this shell being copper is that it has a more woody timbre than, say, steel - a warmer, darker thud.

It's a 22"x16" but sounds more like a 24" with that extra depth and 'oomph'. The supplied Coated Pinstripe batter is a good choice, calming the drum down a fraction, aided by the front logo head which has a 7" diameter 1980s-style centre port hole.

The effect of this is almost like having no front head at all, so you get a massive attack while the report is shortened. We suspect Q has done this to rein in the mighty 'blam'. Played with no internal damping you feel the whole metal shell reverberating.

Not advisable for your lounge trio then, but for any powerful rocking style this will make you king. It's doubly intriguing because initially we were sceptical about those riveted shell joins. Surely without an airtight weld there would be a loss of resonance?

Maybe there is, but removing a head on the small tom and tapping the shell, its ring was double what you'd get from a thin wooden shell. Perhaps that's not surprising, it being the ring you'd expect from knocking on any metal can. But if that can were brazed together at the seam, maybe the ring would be even greater? And maybe that would simply be too much? Fine for a performance of 'Stomp', but too boisterous for a musical drum kit. So, in short, the riveting, as well as looking funky-industrial, might also make sonic sense in the overall scheme.

That's the copper, but remember, the bearing edges are actually maple. Jeremy says, "Using maple as a reinforcement ring adds so much warmth and the necessary attack for that added definition."

The maple edges are slightly flattened which again warms the sound and combined with the copper timbre the drums hold their tuning and clear tone at any tension. The CS batters offer extra reinforcement for hard hitters, just slightly rounding off the attack without reducing resonance as much as perimeter-damped heads.

Tuning the 16"x16" floor tom right down to just above wrinkles produced a great growling roar. But then tuned right back up to bebop tension the drum retains its fat tone and doesn't choke.

In fact, all three drums, including the bass drum, are sensitive to the smallest stroke yet give loads of volume when you lay in. The response, attack, sensitivity and tone are all really impressive.