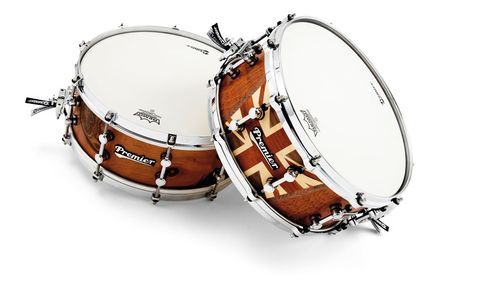 After a five-year hiatus Premier is back manufacturing on UK soil. Showcasing British craftsmanship of the highest order, the One snares encompass a virtually unlimited range of exotic woods.

As an essential ingredient in Premier's rejuvenation, high-end drum production has been re-established in the UK. First off the line is a selection of one-off snares, under the banner of the One Series.

Former KD Drums supremo Keith Keough has been working his socks off, building some of the finest hand-made drums you are ever likely to see.

Each One Series drum is a one-off instrument. Drums are offered at four price points depending on just how complex a build you choose, dictated by shell material, thickness and finish. Type 1 generally has a standard full outer veneer; Type 2 a standard veneer with inlays or a more exotic outer veneer; Type 3 has a more exotic veneer with hand-inlaid marquetry, a rare exotic outer veneer or extra thick shell; Type 4 has especially exotic veneers, hand marquetry in burrs, pictures and exotic core shells.

Since every drum is different, Premier gives each a unique name. So for the purposes of this review we have a Type 1 named The Bowood (retailing at £550) and a Type 3 called The Balmoral (retailing at £650). Bowood has a 14"x51⁄2" shell, 6mm thick, constructed from 12 plies of old Georgian oak and cherry all running horizontally. Icing the cake is an outer veneer of wild English walnut with an extravagantly swirling grain.

Balmoral has a 14"x6" shell, 8.5mm thick, constructed from 15 plies of birch and African mahogany, this time with all plies laid vertically. The outer veneer is Sapele Pommele, which has a more uniform, bubbly reddish-brown pattern. As a Type 3 drum, Balmoral also has an extra twist - an angled 9" section of expertly hand-cut marquetry depicting a stylised Union flag. There's walnut for the blue, sycamore for the white and sapele for the red, bordered by twin strips of walnut which form an arrow effect.

Such special veneers warrant a stunning finish and these are the first Premier shells to benefit from a new blend of natural, environment-friendly oils as used on Rolls Royce dashboards. Keith says, "After lots of research we found an oil that can be safely applied that is smoother than standard oils and has an almost satin lacquer texture without the actual need to lacquer."

Overall, it is clear that supreme care has been taken with these drums. The accuracy of construction and finish of the shells and their edges is spot on.

Each drum has 10 of Premier's British Collection chrome plated solid brass double-ended tube lugs. Being solid there are no air pockets, unlike most die-cast lugs. Each drum also has Premier's chunky 610 strainer, coupled with chrome-plated brass snare wires. The Balmoral has die-cast hoops with (formerly KD Drums) lug locks, while the Bowood has a retro look with single flanged steel hoops and mini claws.

Not one but two quality badges - the Premier script logo and the '1 O[F] One' badge - adorn the exterior and the brilliant 'diamond' chrome plating is stunning.

Here's our only small grouse. We find the 610 strainer slightly awkward. When you drop the snares the tension knob is not the easiest to grab and turn. Everything else about these drums though is a pleasure. The Premier logo cloth snare straps smooth the action and the quality brass snare wires contribute to a finer tone.

Such organic, exotic shelled drums really need playing in and living with. But first impressions count, and blow us down if the Bowood with its vintage single-flanged hoops and thin shell of Georgian oak and cherry didn't have an immediate vintage tone. By that we mean it is distinctly woody and open. Single-flanged hoops place less restriction on the shell, allowing the shell to sing, resulting in a purer, truer sound. Cross-sticks are transparent and rim shots rich. A characterful drum for intimate, acoustic, funky- jazzy contexts.

The Balmoral has heavy die-cast hoops which lend a more aggressive edge, but are also more controlling. The drum's tone is harder and raised by the thicker shell. With its medium-deep shell combining the attack of birch with the warmth of African mahogany it provides a rounded tone that will excel in diverse musical settings. With or without rim-shots this drum delivers a wonderfully powerful, tight and yet beefy smack.