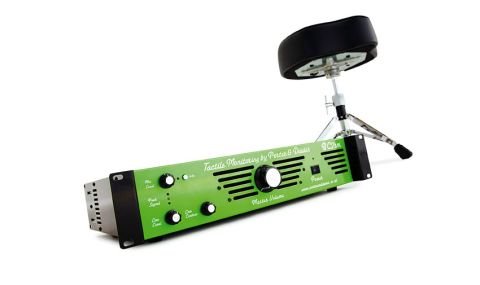 The BC2rm is a ruggedly-built, road-ready tool from a company at the forefront of tactile monitoring. It has been designed for touring on a professional scale and so carries an appropriate price tag.

Since its debut in 2010, Porter and Davies' BC2 has redefined low frequency monitoring. The BC2rm is a rack mounted version of the original BC2.

Like the BC2 and P&D's cut price BC Gigster models, the BC2rm is a tactile (silent) monitor. In the world of Porter and Davies silent doesn't mean inaudible - far from it.

Perceived sounds are usually the result of soundwaves vibrating the eardrum then travelling into the inner ear before being interpreted by the brain. Porter and Davies' system works along a similar principal of vibration called bone conduction, producing a sound that you feel and hear whilst staying physically silent.

The BC2rm consists of two components - the engine and throne. The engine is housed in a 19" rack casing with fixing holes to enable it to be slotted into a regular rack mount. Twin input sockets allow the source sound to come either directly from a bass drum mic or a mixing desk.

The four dials at the front adjust the strength of the signal in (mic level and line level) and control the power (volume) and shape (low contour) of the output. A single NL4 Speakon output socket connects the engine to the throne.

There are three designs of throne to choose from. Concealed within each are powerful transducers which vibrate on cue from the engine; initially this movement is felt but the sensation soon fades into the background. The magic of tactile monitoring then becomes apparent as the vibrations travel up the spine to the skull and become sounds.

What sets any Porter and Davies product apart from the competition is the speed and subtlety of its operation. The BC2rm operates in real time, with no discernible lag between the stroke being played and the throne responding. Every facet of the bass drum - tuning, level of attack and length of decay - is conveyed accurately.

It's hard to describe just how connected to the kick drum you feel and equally how aware you become of the contributions that your pedal foot is making to the music.