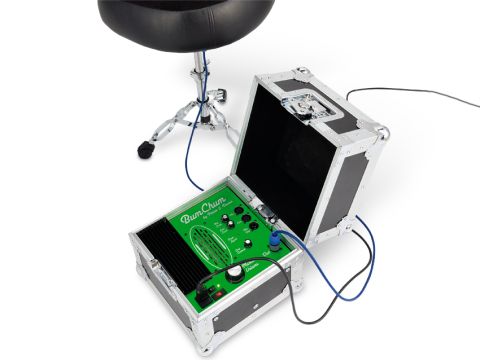 If the bass drum is at the heart of a kit, then the BC2 puts the drummer at the centre of that heart. Feeling every beat improves timing and, in our experience, promotes under- rather than over-playing.

Porter And Davies 'BumChum' BC2

Porter And Davies 'BumChum' BC2

Porter & Davies BC2, formally known by the risqué and attention-grabbing moniker of 'The BumChum', is an inspired piece of engineering that brings what was only available as a bespoke high-end solution within reach of mere mortals - albeit cash happy ones - in an easy-to-use package.

The BC2 is the result of a collaboration between sound engineer Tim Porter and Oysterband drummer Dil Davies. Together they set out to solve the monitoring problem that has perpetually dogged drummers: how to reproduce the front-of-house bass drum sound onstage.

To an audience, the bass drum is felt as much as it is heard. Replicating a similar level of power in a monitor is difficult to the point of impossible. If you've ever played a venue with a full PA system you'll be familiar with the conundrum. Sound-checking the bass drum in isolation you get some idea of the power being channelled out front, but in the heat of the gig it's often barely discernible in the onstage mix.

Over the years, drummers have gone to great lengths to try to correct this and have invariably ended up creating further problems for sound engineers in the process.

Porter & Davies' BC2 is a tactile monitor - it's silent and works by transforming the signal into movement. Tactile monitoring is not a new concept but the existing technology has, until now, had to be custom built for each individual, putting it out of reach of all but an exclusive club of top-flight players.

The BC2 advances tactile monitoring by several leaps while also presenting it as a plug-in-and-play package. It consists of two parts; a throne top and a flightcased engine which powers the throne. Two styles of throne are currently available with the BC2; a traditional round cushion and a triangular tractor-style seat. Housed inside the throne top are the vibrating components, (which bring quite a bit of weight with them).

Tim Porter has sourced the latest generation of transducers, which are smaller, more sensitive, powerful and reliable than any previous models. How many of these are stowed in the throne top the makers won't say, but the thrones are 11cm deep and offer a near-normal level of comfort.

The flightcased engine requires an input which can be either a mic direct from source or a line out from the relevant channel of the PA system. From there it's simply a case of plugging the throne into the engine with the supplied cable and dialling in a signal.

A wide level of adjustment is possible, from the faintest tremor to a bowel-loosening jolt. The idea is not to be thrown into the air with each stroke. Once balanced at a suitable point we found that the thump blended subliminally into the incidental sound of the drum. So, though you're feeling the sound, it seems as though you're hearing it (similar to the effect out front).

Several times we became convinced that we could hear all we needed to and turned the engine off mid-song, only for the bass drum to all but disappear. It quickly became obvious that my senses were being fooled and that the movement was being interpreted as a sound.

Apparently this is not uncommon and, as if to allude to it, the output level pot on the engine is titled Master Volume. What's most impressive about the BC2 is the speed and accuracy of its response. Variations in dynamic levels are matched exactly and there is no lag or catch up between the initial stroke and the throne's reaction.

Differences in tuning and the level of damping are also reproduced faithfully, while additional sound-shaping can be achieved through the Low Contour dial. The fact that the BC2 is silent means that, far from upping sound levels, it actually reduces them.

It's the sort of piece of gear that tried, even once, immediately becomes essential - we ended up taking the review model to rehearsals too, it's that good.