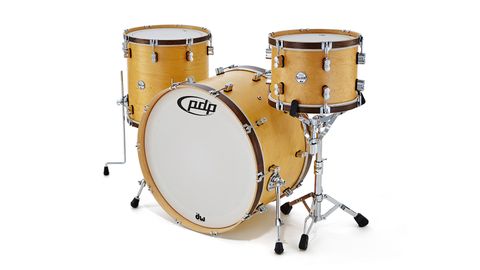 This set is a great sounding cost-effective alternative to DW's flagship drum range.

It is becoming increasingly difficult to distinguish between recent PDP wares and those of its more high-end drum-producing parent company Drum Workshop - attempting to find clues in lug design, lug count, the badge and often the price.

The question is, has the latest offering of the "re-imagined line" of Concept Series drums taken PDP yet another leap forward in mirroring its DW parentage?

Up for review is a brand new Classic Wood Hoop shell-pack, specifically designed for its retro allure.

In a departure from PDP's oval lugs, the Concept Series has adopted a "retro-inspired" double turret 'tube' design. Even with a long hard look at each of the solid looking lugs, it leaves you scratching your head in fathoming how they can be described as 'tubed'.

An example of the strong influence from DW is that the oval PDP badge has now been superseded with a circular one, with the position and placement of it on the kick exactly the same as on DW drums.

While we're on this point, though it's the Concept Series which dominates the badge metal work, the PDP and DW logos are given the same prominence.

All of the drums have maple ply hoops and feature low-mass pressed steel or 'stamped' claws to help create that vintage vibe.

The tom hoops (similar to the ones for the bass drum), have no holes or any type of tensioning hardware built-in. Instead they are gripped by the claws (sitting atop of each rim), and held under tension by a set of True- Pitch tuning bolts.

Each claw has a small piece of felt fixed to the inside to help avoid them digging into the surface of the maple hoops. Other damage prevention measures include the thick rubber gaskets of the twin-turret lugs and the provision of the pad on the hoop of the kick for the pedal attachment.

There is no mounting hardware on either the rack tom or the bass drum. Prior to the release of this wooden hooped kit, all of the Concept Series bass drums were fitted with a bass drum-mounted tom post, had die-cast claws and triple-flanged steel hoops. In fact, up until the release of this retro set, PDP had no plans to introduce undrilled bass drums either.

Of course it would be a crying shame to cut a sizeable hole for the mount within the maple mass of this 24" diameter shell!

The rack tom has no form of mounting either, and so is designed to fit into a snare stand - so it's worth bearing in mind that, when choosing hardware, you may need to factor in an additional snare stand. PDP has very kindly provided one for the purposes of the review.

Drums of the Concept Series are offered in either maple or birch, however, these Classic wooden hooped models are available in maple only. This wood has been chosen specifically for its mellow tone - PDP say they have no plans to introduce a birch version.

As we have come to expect from DW/PDP, the standard of build and finish is nothing short of superb. It's not simply skin deep though - behind the scenes we see beautifully sanded interiors, well-engineered metal components and all three drums appear to have perfectly rounded shells.

Each of these has a standard 7-ply construction with the subtle maple grain of the inner and outer plies running horizontally.

Currently, there are two matte-themed finishes available; as in the review shell pack, a walnut stain on the outer sides of the maple hoops and a natural finish shell exterior, or a walnut stained shell with a natural maple hoop. We think the latter has the slight edge in the retro stakes, but, as always, it's purely down to personal taste.

In a vain attempt at reducing packaging, the bass drum arrives in a box with the heads, hoops and claws removed - it still remains a pretty hefty box though!

The heads supplied are white coated Chinese-made Remos with inbuilt perimeter dampening. Also included is the familiar dog-bone shaped dampening pillow. Velcro strips on the pillow allow it to be positioned on the base of the interior of the drum while also giving some degree of adjustment.

Once we've given the bass drum interior a once over, the heads/cushion are fitted and we can begin the process of tensioning. While ultra-smooth, the fine threads of the True Pitch bolts take quite a few turns before they begin to take up the slack.

However, the various dampening measures undoubtedly help achieve a reasonable sound quickly and without any fuss - basically involving turning the bolts until the last crease smooths away.

However, it's not until the rods are cranked two or three turns further that the drum begins to show its true colours - producing a thunderous stage-shaking shudder. It then takes quite a few seconds after each hit before the drum (and the surrounding area), finally stops quivering.

As expected, the pedal response is not quite so keen, due to a restrained rebound from such a large diameter head. Increasing the tension may help a little, but it will never be as responsive as a smaller bass drum.

With the rack tom up and onto its snare-type stand, it is elevated enough to lift it above the side of the bass drum but also to position it ergonomically. The maple rims of both toms appear to be a little higher than the usual metal hoops. This means being able to position each tom (to help avoid too many collisions with the stick shoulders), all the more important.

After a little fresh-out-of-the-box tuning and slight tom tweaks, we are ready to roll - these hoops appear impressively rigid and the generous quantity of lugs help make tuning a real pleasure.

The Chinese-made single-ply Ambassadors help provide us with a completely open sound. These certainly assist the toms to sustain and sing out proudly. The floor tom especially has a lengthy, smooth overtone which we are sure will help with projection.

The hoops too appear to be doing their job in helping to keep the drums within their woody vintage remit. And, it's worth noting that even though we've been playing the kit for several hours, there is no evidence that my 5Bs have been anywhere near them.

What the drums lack in attack, this is more than compensated for with their rich, sweet, maple, woody tone - exactly as intended.