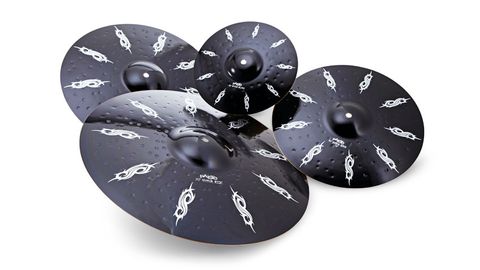 The selection in this set will be enough to whet your appetite but the RRP but could well dry it up again and put you off any potential purchase - fortunately the 'street price' will make this a more palatable purchasing proposition for what is a versatile set of cymbals.

Even if you're not into the world of metal or any of its sub-genres, the chances are you will be familiar with Joey Jordison and the mind-blowing drumming skills of the often-masked Slipknot sticksman and co-songwriter.

It is Joey's blistering footwork and highly-energetic fills (even when playing upside down!), that has given him world-wide recognition, including being voted best drummer of the past 25 years by Rhythm readers - an achievement of which he is extremely proud.

The new Black Alpha series has been created in honour of Joey, a long-time Paiste endorsee, and his "passion for eccentric and unique cymbal designs".

These shiny black 'Hyper' cymbals are derived from Paiste's mid-range to pro-level Alpha series and modelled on the current Slipknot touring set-up and, of course, are designed specifically to be played in a metal environment.

The original Alphas were introduced in 1991, but then re-launched in 2006, having been redesigned and drastically improved, becoming one of the Swiss cymbal manufacturer's most popular lines.

This Black Alpha set comes imaginatively packaged and printed to look like a much-gigged flight case, even down to a selection of stickers and strips of the pre-requisite gaffer tape.

The set contains a distinctive selection of medium to heavy weight cymbals comprising a 20" ride, 16" crash, 14" hi-hats and a 'free' 10" splash. Each of the cymbals are shaped by computer-controlled presses out of sheets of a CuSn8 alloy (aka 2002 Bronze - 92 percent copper, 8 percent tin) - first used by Paiste for their Stambul '65 series way back in 1965.

With the exception of the hi-hat 'bottom' and each bell, all of the cymbals feature deep 'hammer' indentations (unique to the Black Alpha series), across the whole surface.

In contrast to the rich shiny black cymbal surface, silk-screened in white is a series of logos including 'PAISTE', model designation and size, along with nine Tribal Slipknot 'S's, each sized proportionally, according to cymbal diameter.

On the upper surfaces, there is no reference to the Alpha series, but on the underside, printed in gold, is the smallest 'shine' Paiste logo and Alpha symbol.

Paiste was the first of the big cymbal manufacturer to colour its cymbals - its 'Colorsound' paint technology not only creates a stunning looking cymbal, but, according to Paiste, also enhances the sound - apparently adding further bite to the initial attack, while centering the overtones.

It is the combination of these heavy cymbals and unique coating which should produce a wicked attack - nice. The Colorsound coating covers the entire cymbal area (upper and lower surfaces), of the ride, crashes and splash, but the hi-hats have only the upper surface of the top cymbal and the underside of the 'bottom' hats coated.

The super-weighty bottom hi-hat cymbal isn't going anywhere, sat, solid as a rock, on hi-hat stand, while the much lighter (but still fairly heavy!) top proves a killer combination with all the pedal splashes and 'chicks' readily available and providing some lifting, driving elements to each rhythm pattern.

The crash and the splash too create significant 'drive' while being capable of hacking through unthinkable levels of amplification - and the splash has the effect of someone accidentally smashing a glass in a quiet restaurant, a real head-turner.

The crash capably fulfills the accenting job, which sounds a little too warm until it is given some blistering thrash techniques - then this opens up, given some stonking full-stops to any musical bar.

Striking around the bow of the ride shows this cymbal is awarded with significant bite, producing a crisp sharp 'ping'. Its frosty wash is easily controllable by striking in a variety of positions - up near the bell there is little or no build but down near the edge it's full-on from the first hit.

These cymbals are designed to sever through walls of distorted guitar with a pitch that is high, but not at all unpleasant. The medium-sized unobtrusive bell is sufficiently sized for the stick shoulder to clout without having to think carefully about aiming for it. When given a few hefty wallops, this produces a slightly lower pitch than the bow but speaks volumes, helping elevate any guitar solo or bond a middle-eight section.