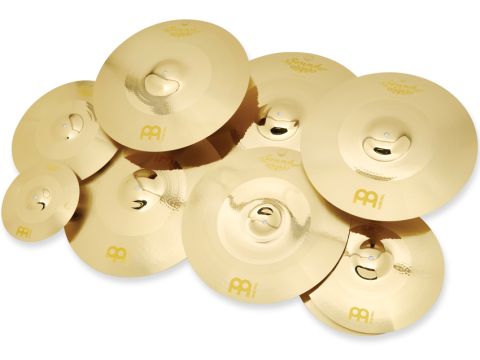 This set of Soundcaster Fusions shows that Meinl understands where the market is heading and can react swiftly. Meinl knows how to make decent cymbals and the selection is up to its usual high standards.

Launched at the 2009 NAMM show, Meinl's Soundcaster Fusion cymbals feature two contrasting types of finish side-by-side on each cymbal. While this treatment is not without precedent, it is relatively new among mainstream cymbals.

The new Soundcaster Fusion cymbals sit alongside the established Soundcaster Custom models, dividing the Soundcaster range into two groups. While the new selection of Fusion cymbals is not as comprehensive as that of the existing Customs, it features diameters from 10" to 22".

The launch revealed single models of splash, hi-hats and china, two crashes and three rides, all of which we tried out.

Both Soundcaster Fusion and Custom cymbals are created in the same way - cut from rolled sheets of B12 bronze alloy. Where the equivalent Soundcaster Customs look like regular cymbals, the new Fusions are unmistakably different.

From the centre hole to almost halfway across the diameter, each cymbal is unlathed and polished to a glass-like sheen. The remainder of each cymbal is scored with narrow, regimented lathing bands and has a satin style finish. Neat bands of machine-made hammer marks flow across all areas of each cymbal with the exception of the bell, which remains hammer (and lathe) free.

Underneath the cymbals are treated in exactly the same manner, with the only difference being the reproduction of just a single Meinl logo.

Though the well-proportioned bells are clearly a good deal more substantial than the edge of each cymbal, the thickness tapers off gradually across the bow and there are no obvious steps down at any point. The cymbals feel balanced and of an average weight.

The 10" splash opens immediately with a bright bblast followed by an instant fade. It behaves exactly as a splash ought to, giving out miniature silvery explosions that are ideal for punctuating and embellishing.

All of the Meinl crash cymbals I've encountered have been consistently good and the pair of Soundcaster Fusion Medium crashes don't break the habit. The 16" displays a good mix of opening high frequencies that subside to reveal warmer fundamentals.

Meinl claims that the design of the Fusions equips them with an 'enhanced shimmer' and there is a smoothness to the top end that lends a harmonious air to the decay.

This smoothness is also present in the 18" Medium crash. It's naturally louder and deeper than the 16", but projects a similarly clean blend of tones with great results. The bell responds well to being ridden, giving a strong, brassy note. In fact, if you required nothing more than a bell sound from a ride cymbal then the 18" would be ideal.

The single Fusion china is an 18" model with a wide upturned flange. Tapped with a stick, it answers with a dry, trashy note. Hitting it full-on brings out an altogether more violent reaction, flaring into life with a furious bark. While it's not the darkest china I've heard, it packs quite a punch.

The differing finishes make their influence felt most with the three ride cymbals. Playing the lathed outer section of the 20" Medium ride brings a light, precise stick sound above a complementary wash. Moving up onto the central portion the response is brighter and more insistent, and the wash less audible. Upon reaching the bell the sound becomes more focused, metallic and, of course, louder.

The two Powerful rides (20" and 22") are noticeably heavier cymbals. The extra weight means that they are higher in pitch and more penetrating. Progressing a cross the different zones of the Powerful rides brings similar responses, with the stick sound being harder and more isolated. The bells (especially on the 22") would register on any clang-o-meter.

The only current Fusion hi-hats are a pair of 14" Mediums. Played at the edge they give a warmish, slightly fuzzy stick sound. Travelling further in the sound tightens up and becomes more cutting, though not to the detriment of overall character. A metallic edge is also present when letting them sizzle half-open, but again it doesn't dominate.

A cross nearly all dynamics the hats give a versatile blend of projection and tonality.