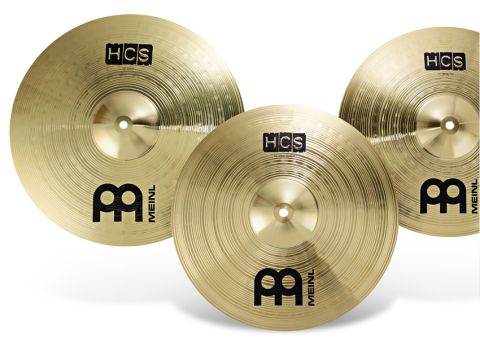 Surprisingly good cymbals that would make a sensible purchase for any beginner.

Meinl is the epitome of efficient German engineering, combining over 50 years of instrument expertise with advanced manufacturing processes.

The company's ever-expanding range of cymbals has models to suit all genres. The set we have for review contains a selection from Meinl's entry-level HCS range, which it says "offers the best possible sounds at an affordable price".

"Striking the 16" crash at the edge with the stick shoulder sees the cymbal peak instantly and tail off just as rapidly, leaving a sustained note that's actually quite pleasant."

Buying cymbals in a boxed set can have advantages over purchasing them individually; it saves money and the hassle of selection, and they will usually be tonally matched.

HCS cymbals are created from a brass alloy, MS63 (MS = Mint State, 63 = percentage of copper). This brassy formula is used by many manufacturers for their entry-level cymbals, because it's easy to work and is a relatively inexpensive material.

Rather than casting, each cymbal is formed from sheet brass which is pressed into shape, lathed and hammered on the top surface only and then, finally, polished.

Printed in black upon each cymbal is the series designation 'HCS', together with the familiar Meinl logo. Laser-etched into the upper surface is yet another, much smaller logo, country of origin and serial number.

Like most hi-hat pairs, the bottom cymbal is thicker and as a result, heavier than the top. The crash is reasonably thin with a shallow taper and, like the hi-hats, has wider sound grooves around the bow but much finer ones on the bell.

Striking the 16" crash at the edge with the stick shoulder sees the cymbal peak instantly and tail off just as rapidly, leaving behind a sustained note that's actually quite pleasant. Rather than being ear and air-splitting, the sound produced is full-bodied and quite dark.

Playing with nylon tips produces a useful cut from the bow and the bell sounds surprisingly good with some well-aimed shoulder strikes, proving the cymbal to be equally useful perhaps as a crash/ride.

The hats produce some surprises too. All the usual tricks are feasible and readily available, with actions such as half-open, pedalling with the 'chick' sound, striking while closed and then opening rapidly - it's all there. There is a slight underlying harmonic going on beneath each individual stick strike, but this is lost when adding drums.