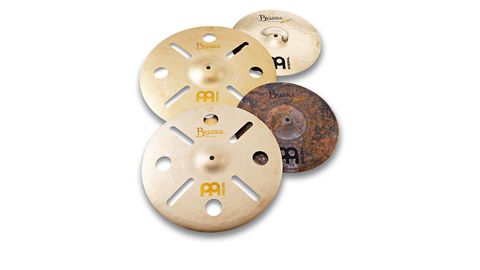 The Serpents Hats' innovative design makes them versatile and capable of different sounds and feels. While not being quite as inspired, the Trash Crashes also hit the spot.

Although Derek Roddy is best known for dropping wrist-mangling blastbeats he is well schooled in a variety of drumming styles. This is reflected in the versatile nature of his 13" Serpents hi-hats where, instead of designated top and bottom cymbals, either cymbal can be played toppermost.

As one of the cymbals is heavy, lathed and brilliantly finished and the other is medium-weight, raw, unlathed and speckled with hammer marks, each pairing should provide contrasting responses.

The 16" and 18" Trash Crashes are paper-thin and have a semi-matt finish that resembles that of their Byzance Vintage stablemates, Benny Greb's Sand cymbals.

Unlike Herr Greb's offerings, the Trash Crashes feature a series of circular and cigar-shaped apertures to accentuate the trash factor and provide funky visuals.

With the brilliant cymbal on top, the Serpents hats are razor sharp and respond instantly to every input. The stick sound is clean, tight and ideal for enunciating rapid fire patterns. Played nearer the edge the hats sound bigger than their 13" diameter - beneath the brightness is a note of considerable depth. Relaxing the pedal finds them breaking into a churning wash.

Swapping the cymbals round brings a warmer, slightly looser response. Where the note was finely honed and needle-precise it's now more spread and slightly frayed. The timbre is different as well: deeper, less metallic and softer all round.

Derek reckons that in this configuration the hats could be used for a bebop gig and, while they could be a little on the powerful side, sound-wise they're pretty darn close.

There are few ambiguities in the Trash Crashes' name and fewer still in their sound; a blast of scything attack lit with coruscating trashiness, edge wobble and rapid decay. They are so intense and abrupt that they are nudging into china territory.

The smaller model is marginally higher in pitch - though still dark and dirty for its diameter - while the 18" unleashes an angry blaze of tangled frequencies.