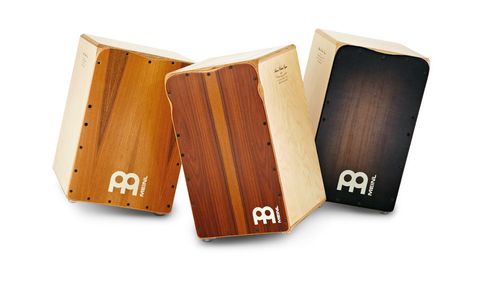 Artisan cajons are exceptionally well crafted. They have subtle and colourful tones, befitting their flamenco genre. But they are too expensive - how can a simple wooden box cost 500 quid?

Meinl has certainly gone to town on cajons, with 39 different models. Top of the pile are these Artisan Edition Flamenco Cajons - Soleá (£278), Cantina (£474) and Seguiriya (£503), three from a series of six, handmade in Spain.

Although Peruvian folk cajons have been around for 200 years, their co-option into flamenco apparently had to wait until the 1970s. Cajons are ideally suited to flamenco, with its hand-clapping (palmas), foot tapping and stamping wizardry.

As cajons go, we've not seen any more handsome and solidly built than these. All three have the same lacquered finish, which is satin smooth and gorgeous, including the tops (where some cajons are purposely roughened for extra butt-grip).

The sides, backs and tops are thicker than most cheaper cajons - being 9-ply (Cantina, Soleá) or 11-ply (Seguiriya) - so the boxes feel exceptionally strong. This allows the playing edges to be more contoured than is possible with cajons made from thinner planks.

The frontplates are thinner veneers of hardwood with textured sealed finishes providing the appropriate tactile playing surface. All three boxes have small, specially formulated rubber feet and each model name is heat branded in an attractive script.

The Seguiriya and Cantina are twice the price of the Soleá and it's not entirely evident why. The Soleá is just as solidly built, but has 10 guitar resonating strings, which are not adjustable, while the other two have twin sets of eight strings (16 in total) which are vertically adjustable via two tension screws in the top (Cantina) and underneath (Seguiriya). A small Allen key wrench is provided.

Seguiriya has a figured Palo Santo front plate while Cantina has dark walnut. Seguiriya is further distinguished by a couple more curves than the other two - concave dips in the front sides about 9 cm down from the top. It also has a pretty inlaid marquetry square in the top seat.

The cajons' super-sturdy build means you feel confident sitting on them knowing they won't collapse, unlike some flimsier cajons which can feel quite perilous. The thick construction also allows for generous curves with no semi-sharp edges. In fact the important top corners are completely curved so you can cup you palms over them without any discomfort.

Those smooth satin finish tops do mean you slide around and the drums are on the small side too, so if your rear is generously proportioned you may wish to seek a larger model cajon. Or sit separately. The extra width of the Cantina certainly made it more comfortable.

Flamenco is a most dynamic and dramatic style and requires fast and subtle accompaniment - a tight and nimble cajon technique, lots of fingers with the occasional forte slap and shouty passage. We can see how these dense, compact cajons fit the bill.

The thick sides have a super-tight trebly ping, while the much thinner frontplate is unusually free to resonate. So, as with thick shelled conventional kit drums, this playing 'membrane' is relatively uncoloured in its timbre by the rest of the thick walled drum.

Thus the specific timbre of the frontplate is properly heard. The super-hard Palo Santo is dark and loud, rich in character, while the extra width of the Walnut Cantina gave it more depth and warmth. The Soleá was brighter with fractionally less personality - more of an all-rounder.

The upshot is that these cajons are perfect for subtle and acoustic styles - like flamenco or Latin - where delicate finger strokes alternate with passages of macho intensity. Unplugged rockers may get more joy from something a little rangier and more ploddingly rattly... and cheaper.

Because ultimately our problem with the Cantina and Seguiriya is their price. They are described as 'Handcrafted Masterpieces'. We're sorry, but a handcrafted masterpiece is a particularly fabulous violin or flamenco guitar, not an oblong box, however smoothly sanded the edges.