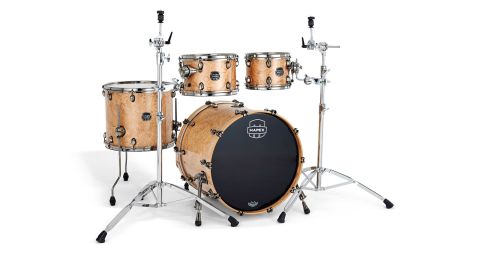 This is a fantastic all-rounder kit which is equally happy on stage or in the studio - on a jazz gig or playing rock.

Over the last decade the Mapex Saturn Series has been systematically transformed beyond recognition of its Saturn Pro ancestry.

Last May, we checked out the Mapex Saturn IV which received a complete facelift to include Black Panther-styled lugs and the superbly engineered Soniclear suspended tom mounts, each contributing massively to a sleeker appearance and enhanced resonance.

While these were quite major developments for the Series, there were also additional, slightly more subtle refinements too. What exciting new features can we expect from the Saturn V, and how will they compare to the Saturn IV?

Taking centre stage is a brand new four-piece Saturn V shell pack, finished in one of the new schemes of the mouth-watering Exotic Natural Maple Burl.

These Exotic 'Sound Wave' MXN drums are just one of seven preconfigured sets available. Mapex describes this review selection as "offering balanced versatility in the ultimate shell pack for use with any and every music genre".

This lush review line-up includes a pair of comparatively shallow 'short stack' 10"x7" and 12"x8" rack toms, a 16"x14" floor tom, a portly-proportioned 22"x18" kick and the newly designed TH800 Soniclear suspended tom clamps, which are included with each of the rack toms in every shell pack.

In keeping with Saturn's traditional hybrid construction, the shells are made from plies of American Rock Maple and walnut - each drum topped with a sumptuous layer of Natural Burl Maple veneer.

The deep figuring of the Burl grain is as distinctive as it is beautiful and wouldn't look out of place on any piece of high-class furniture. Each seam is staggered (including the veneer) and running diagonally at an angle of 45°.

The Maple provides the bulk of shell construction having four plies (with a veneer on top) and another two plies of walnut. There is a thin coating of sealer over the inner shell wall surface which feels smooth to the touch. The finishing touch to each drum comes from the complementary black nickel plating (found on all of the Saturn V Exotic kits), upon all of the metal hardware - perfect.

Following in the footsteps of Mapex's Armory and Mars Series, one of the most significant upgrades for these new drums is the Soniclear bearing edge.

While the inner edges are trimmed to 45° for the rack toms and 60° for the kick and floor toms, instead of the usual sharp summit, this edge has a slightly rounded, flattened back-cut which extends out to the shell's outer edge.

This allows greater contact between the head and shell which, according to Mapex is to coax as much depth out of the drums and help with tuning. For Mapex, like many other manufacturers, it's a delicate balancing act between squeezing as much resonance from the shells and attaining the fundamental tone from the shell.

One of the other upgrades for the Saturn V is the Soniclear rack tom clamps/mounts. Instead of the usual two component parts of clamp and spiked resin ball, this bracket combines both. This is said to help the toms to resonate rather than the hardware absorbing the energy of the drum.

These are extremely beefy and robust pieces of hardware which weigh roughly 2kg each. They are designed to fit a range of tube diameters from 3⁄4" (approx. 19mm) up to well over 1" or nearly 30mm. The cunning design allows the user to clamp them with only one hand helped by a spring which holds the clamp jaw open for the task.

One neat design element worth mentioning is a recess within the clamp itself which allows the spiked portion to fold neatly into it - it may be heavy but it won't take up too much room in the accessory case!

This shell pack comes fully booted with USA manufactured Remos all round. For the batters we have the dual-ply Emperors, partnered by single-ply Ambassadors for each of the resonant heads.

Out of the boxes, as per usual, the heads come tautly tensioned, but rarely are they ever 'tuned'. Time to roll the sleeves up, slacken off the tension and bring it back up gradually in the hope that we can swiftly locate the 'sweet spot' where the shell and head vibrate in sympathy. It doesn't take more than a few minutes for each drum to begin to open up and resonate; literally as if you've just flicked a switch - it can be that noticeable.

So up go the freshly tuned rack toms onto the spikes of the new Soniclear mounts. In use the new clamps prove to be surprisingly quick and convenient. The extra-wide clamp jaw readily fits the widest diameter tubes of my stands and the resin balls lock the drums into position with hardly any pressure from the winged bolt.

The 'Memory-Mark' gauge on the kick spurs also helps speed set-up time in achieving the same, optimal angle on both sides. With just one twist of the large rubber foot, the sharp point of the spur spike is exposed and the kick feels 'locked' onto the stage surface.

However, with the spikes retracted, they do feel as if they were quite loose and about to fall off; our initial thoughts were that they could be prone to rattling about. With the weight of this big drum sat on the stage floor, the sheer bulk of the kick sees any worries completely unfounded.

After playing around with the kit for a while we decide to alter the tension of the batter heads on each of the toms, reducing them slightly, hoping to achieve a slight downward pitch bend - trying for a nice 'doooof' sound.

Attempting this mid-performance can be risky, but it's about putting trust in the drums with the tuning components and heads - each adjustment is made smoothly without any nasty surprises. This was certainly true of the kick where, as was expected, its corpulent stature and Remo Powerstroke heads would provide us with a decent thump.

After a few minutes of 'playing in', we reduce the tension of the batter so it's just up from the wrinkle stage where it packs a capable punch and allows a confident performance. With its deep gutsy clout there's enough power on hand to be able to taunt the bass player with the true meaning of bottom end!

While the rack toms remain highly pitched, you feel they are just a little over mid-point of their large tuning range. They are also quite ballsy, with a short but pleasant overtone and, thanks to a reduction in batter tension, also possess that downward pitch-bend which we prefer. As the heads are still tight, we can enjoy a lightning- quick stick response.

Again there's often a fine line between trying to get the sound deep enough while not compromising feel, the combination of relatively shallow depths, decent twin-ply heads and the rounded bearing edge all contribute to a great sound. It's interesting to note that even after a full-on gig, there is no evidence of any detuning on any of the drums - impressive.