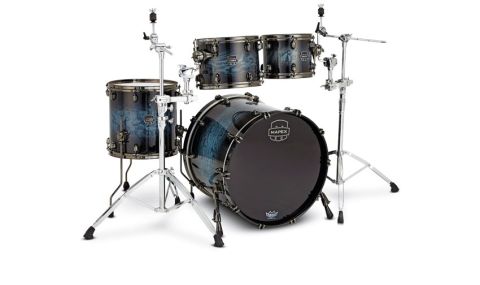 With a superb finish, excellent build quality and a great sound to match, this is a seriously good set of drums.

At the turn of the new millennium Mapex launched its Saturn Pro line of drums. Five years and a rebranding later this marked the arrival of the Saturn series. Over time these pro-level drums have been refined and re-engineered and are now into their fourth incarnation. Pitched just below the flagship Orion series, the Saturn series occupies the number two slot in the Mapex rankings.

For review we have a new four-drum shell-pack finished in a Deep Water Ash Burl. The drums here are from the Mapex MH Exotic Edition, featuring black-chromed hardware and rather exotic ash burl veneer throughout the entire range. In contrast, the Saturn MH Edition has a selection of wraps (including two sparkles), transparent lacquers and sports chromed hardware.

This 529x shell pack comprises 10"x8" and 12"x9" rack toms, a 14"x14" floor tom, and an undrilled 22"x18" bass drum. Though the suspended toms of this set hang from the supplied resin-type mounting clamps, Mapex also offers the option of a 'Free-floating' bass drum mounting kit which sits astride special rails that attach to the topmost lugs of the drum.

Mapex has retained the familiar maple/walnut hybrid construction found on the drums of the Saturn series. Though the first Saturns produced had a blend of maple/ basswood, the change was made in favour of this maple/walnut combo some years ago. So, the shells are similar to the more recent models, but the new Saturn IV series has been given a complete facelift. This includes every piece of metalwork redesigned, re-engineered and enhanced.

Some of these enhancements will be immediately obvious, such as the new Mapex 'M' badge for example, while others are a little more subtle. The most significant, but, ironically, the smallest, is the reduced lug size - now sleek and slender. The edges are smoothly contoured, in a similar design to those on some Black Panther kits and snares. Gone are the steel straps which straddle the lugs of the floor tom and suspended toms but the floor tom legs have sprung rubber feet for stage isolation.

A major design improvement for this series, and possibly any other of the Mapex range at a later date (see 'They Say...' over the page), is the design of the new SONIClear rack tom mounts. Unlike the usual 'rims' type, the drum isn't suspended from tension bolts.

Instead this system has a 'T'-shaped die-cast bracket with a steel insert which attaches to the underside of two specially designed lugs. While the bracket remains the same size for each drum, the length of the insert changes, determined by the distance between lugs.

There's no denying the four drums here are each built to the very highest level of construction. This is both evident on the inside with the smoothly finished rich brown walnut grain and on the outside too where we have the most stunning visual banquet from the lush 'Deep Water Ash Burl'.

This gorgeous grain looks great on the toms but, as always with such a finish, is revealed to its fullest intensity on the kick. It's like being mesmerised staring into a watery pool where the sand has been etched by gentle waves or even a piece of surreal Chinese art - luscious.

This high-standard is not just confined to the timber of the individual shells but also to the shell hardware. Each piece of the metalwork is beautifully engineered with no evidence of any sharp or rough edges. This standard extends to the contoured lines of the kick claws, their recessed tuning bolts and the rubber gaskets which help avoid rattles and gouging into the hoops. The final touch however comes from that black- chrome plating which adds class and opulence to each of the drums.

Thanks to the Remo heads being pre-fitted on each drum in Mapex's Taiwanese factory, we can crack on with setting up the kit. Korg has kindly provided a 13" Mapex Black Panther snare, and it has also sent a set of Mapex hardware to partner the shell-pack.

All the stands are up and the telescoping bass drum spurs extended to five notches on their in-built gauge - this gives a slight elevation to the front of the drum. The floor tom legs are locked into position by the clamps and their memory locks - we think the knurling of the legs is slightly over-engineered as the clamps have ample grip on their own.

The SONIClear mounts attach at the top of the bracket and the lower section simply rests on a rubber stop, so we find it necessary to lift the whole drum before lowering it into position, rather than holding the drum in our hands by the mount itself.

Once we get used to this, the whole set-up goes quickly and without a hitch. Tuning is smooth, extremely quick and can be performed on the suspended toms while in position on their mounts - and, if necessary, this design will allow the heads to be changed without having to remove the drum. All toms freely accept any adjustment in tension (both up and down), with ease. From a low rock pitch to something a jazz player would be more than happy with, any effort is minimal.

Even when being virtually reclined back into the drum stool we can feel there's a bounty of power and attack with a punchy low-end, even from the 10" tom. Leaning in towards the kit, there is a huge amount of air being shifted and a deep sound projecting out from them, striking us in the chest.

Any overtone produced is minimal and controlled with an overall dry but rich and crystal-clear tone. The 14" floor tom is particularly robust and powerful and, like the suspended toms, perhaps given a little extra bottom-end boost from the dual-ply Emperor batters and the maple/walnut shells.

There is no doubting that this kick packs a punch too - we are, yet again, talking chest walloping territory here. What surprises me is just how well-controlled the resonance is - some nice low-end oomph without necessarily being boomy.

This is especially surprising considering there is little in the way of dampening. Just a minimal amount from the internal perimeter ring of the Remo Powerstroke-3, but it seems to be enough to do the job. We are now getting used to the familiar story with all the drums here - powerful but fully at my control.

Here we find ourselves with some drums which could be unique... We are sure they will delight both drummers and recording engineers alike - now that's rare. While they sounded great at a couple of live gigs and the finish proved a real head-turner, we would really like to do some recording with them. With their inherent dryness and rich sound there will be little to cloud any mix. Tuned well there's no need to stifle this sound with any further dampening methods.