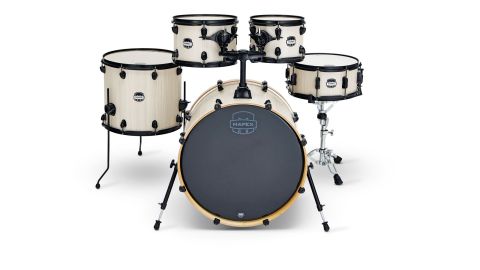 This kit looks good, gives an assured performance and is great value.

Mapex launched its Mars and Armoury series together at NAMM 2014, in the process introducing the company's SONIClear bearing edge to the drumming world. Though Mars has been used as a series name by Mapex previously, it stresses that the new drums bear no resemblance to the former range.

The shells are all-birch and are a uniform 6-ply/7.2mm across all drums. Inside they are sanded and lightly sealed and bear the classic light hues of birch. A choice of four new wrapped finishes is available, all of which are ribbed (so the vertical detailing stands proud).

The result is reminiscent of artisan wallpaper, but it works and provokes anyone in touching distance of the kit to run their fingers over the drums. The low mass lugs are based on the design that was developed for the Black Panther series while Mapex's elegant SONIClear tom mounts are fitted to the toms.

Contrasting with the off-white Bonewood finish of the review kit is the black hardware, which comes as standard with two of the finish options (the other two have chrome hardware).

Mapex employs an electro-plating process to coat the hardware which it claims is significantly more durable than powder coating. The black coating extends to every part of the shell hardware with the glaring exception of the two tom arms and the inner tubing of the bass drum spurs.

It is possible to request non-standard combinations of hardware and wrap, but only as a special order which will involve a wait of 12-16 weeks. A colour matched hardware pack consisting of 600 Series pedals and stands is also available.

Mapex's SONIClear bearing edge differs to the company's existing edges by placing the peak more centrally and then cutting with a smooth rather than sharp profile. This, says Mapex, allows the head to sit flatter - increasing shell contact, so giving more tone - and also makes the drums easier to tune.

The angle and cut of a drum's bearing edges is a science of its own and we could probably publish an entire magazine dedicated to the myriad of variations and still not reach a consensus. Whatever claims Mapex has made for the SONIClear bearing edge, it clearly feels that it offers an advantage, particularly for these drums.

In fact two different styles of SONIClear bearing edge are found on the kit. The smaller drums (snare and rack toms) are cut at 45° while those on the floor tom and bass drum are 60°, with a slightly wider point of contact.

This influence is immediately apparent as it's striking how much bottom end is offered up by the bigger drums, despite the relative thinness of the Chinese-made Remo UT heads.

The bass drum, undampened and unported, is deep, powerful and remarkably focused. Overtones are almost non-existent and the swift natural decay means no tweaking is required - it's good to go as it is. Similarly the floor tom produces a big punchy note that fades as smoothly as it does quickly with the minimum of fuss.

The two rack toms hold their own in terms of volume and projection. If anything, they're a little on the belligerent side. Switching the clear UT heads for coated USA Ambassadors takes the attack down a notch, allowing the note to round out without diluting the inherent feistiness of the birch.

That the kit has been built to a price is apparent with the snare as the throw-off and butt-end are cheap and flimsy while the snare wires are unbranded and a mere 16 strands across.

Despite this, the snare produces a pretty decent sound. At higher tunings the response is drier, but in and around the sweet spot it gives a thick warm note with good degree of expression.