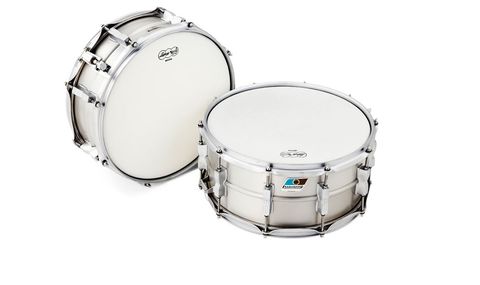 The lightweight seamless aluminium shell is the ace in the hole of the distinctive bright tone of the Acrolite. A go-to, all-round drum - hard to fault. Whichever finish you choose the Acrolite is a classic.

Soon after Ludwig changed the brass shell of its legendary Supra-Phonic snare drum to the new, lightweight Ludalloy (aluminium), the company introduced the complementary student model Acrolite. This was in 1963 and half a century later the Acrolite is still going strong. To celebrate, Ludwig offers us a limited edition pair, entirely in brushed aluminium finish.

What distinguished the original Acrolite was the seamless, centre-beaded 14"x5" aluminium 'Acrolite' shell and eight double-ended Classic lugs. From around 1993/4 Ludwig added a 14"x61⁄2" Acrolite, but with 10 Classic lugs, plus a sparkling Black Galaxy finish option, sometimes called the Black-Rolite. In recent years the latter became the only Acrolite option, but now you can again get the Acrolite Classic (with chrome-plated fittings) plus, until stocks run out, a Limited Edition.

Ludwig's Kevin Packard says, "The Acrolite was changed from the standard/original brushed aluminum to the Black Galaxy powdercoat back in the 1990s to increase durability for students. It was reintroduced in the brushed finish last year to bring back an old favourite."

Kevin adds that the Special Edition drums were a limited production line in 2012 and are on sale now.

The two Limited Edition Acrolites have the original brushed aluminium shells, but, as Kevin explains, "We also had the regular steel hoops, lugs and strainer coated to look like brushed aluminium."

The only chrome you see is on the tension bolts and the lever of the trusty old P85 strainer. It's a love-it or loathe-it look which reminded us of the aluminium/silver plastic of recent car dashboards.

If that's not to your taste, you can always opt for a Classic with its contrasting chrome plated hardware. The two seamless aluminium shells themselves are superb, carefully finished and perfectly round with smoothly rounded-over bearing edges. The 14"x5" has eight Classic lugs while the 14"x61⁄2" has 10.

The Classic lugs are exactly that, the decades-old design still passes muster and the only concession to modernity is the heftier 2.3mm hoops. Plus the black tension screw washers and smaller black locking washers which prevent your tension bolts falling out when changing heads.

Finishing off the drums is the familiar 1970s blue-olive badge, with its individual serial number and proudly stating 'Ludwig, Made in the USA'. Plus the familiar P85 strainer with its simple side-lever design. The snare wires are also straightforward 20-strand steel coils attached by nylon straps - it's all functional, basic fare, hardly exciting, but it works.

At the launch in 1963, the Acrolite boasted the ad line: "Acrolite metal lightens the drum and brightens the tone."

For once an accurate description. It was touted as the student model to accompany the famous Supra-Phonic 400, but some professionals preferred its simplicity. Unlike the Supra- Phonics, which are chrome plated, Acrolites have plain aluminium shells.

The 14"x5" also has eight lugs rather than the Supra-Phonic's 10, simplifying tuning and, because they are fewer, restricting the shell less, allowing a slightly more open tone. The result is a drum which is at once crisp and lively, particularly on rim-shots. Tuned right you get a healthy ring from the centre too, where many drums are simply dead. Live, I definitely found the 14"x5" willing and adaptable.

The 14"x61⁄2" is as crisp as the 5" model, has a lower fundamental of course, but can be just as snappy. It has a clean, almost 'hollow' clonk, characteristic of aluminium. As usual I found the drums worked best with mid to higher tunings which amplify the brilliance. Too low and the drums quickly get sludgy.

As a fan of Ludwig snares this writer also able to compare the 14"x5" Acrolite alongside a 14"x5" bronze shell LM-305 and an old chrome-plated 400, both with 10 lugs. The Acrolite is similar to the 400 (though the latter is a little more compact) and lighter toned than the bronze, which is darker, meatier and more complex.

Although bright, aluminium - being a softer metal than steel - has a slightly spreadier and more musical timbre which tempers the naturally strident nature of metal. It's a winning combination which has made both the Acrolites (and of course the Supras) firm favourites for decades.