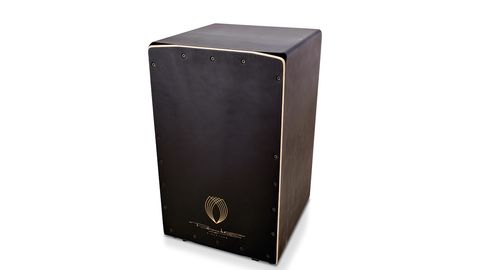 The broad range of sounds, coupled with its adjustability, make this cajon a winner.

Over the last decade, the cajon has moved from a musical curio to a mainstream percussion instrument.

Believed to originate from slaves using packing crates, and carried over from Latin America to Europe in the 1970s, the cajon became adopted in modern flamenco music and thereafter its relative ease of construction and portability meant the cajon rapidly spread from its more traditional heartland into more conventional musical milieus.

Its versatility and ability to mimic conventional drumset sounds in box form have meant it has become a staple for the modern drummer, and its portability and low volume has meant it works well in less structured musical situations such as jams and acoustic sessions.

La Rosa is a company established in Spain that specialises in producing 'artisanal' modern cajons, and we've been sent one each of its Petros Kourtis Signature models to test.

La Rosa's Signature model is finished in a more striking matte black, and is again made of birch ply, and has the edge of the front and rear panels picked out in a natural bead. The front panel is made of 3.6mm phenolic veneer.

The Signature model has an angled top edge, with the corners chamfered down to provide a more ergonomic feel.

The snares are quite tight out of the box, and give a controlled and crisp note when struck at the top of the tapa. The bass tone is full and rounded but well controlled - its fundamental note is lower that you would expect and apes a kick drum well, though a full palm strike brings the snares into play as well.

A few turns with a screwdriver at the top loosens the tapa further to give a crisper tone and more definitive backbeat, which heightens the distinction between the bass tone and snare tones further.

Moving to the sides of the Signature gives clear open mid-tones without the snares - useful for adding rhythmic or tonal colour, or for keeping time when a backbeat is not necessary. Fingertip strokes on the top give a high-pitched, almost clave-like sound, and reaching around to the back gives a full, warm tone uncoloured for the most part by the snares.