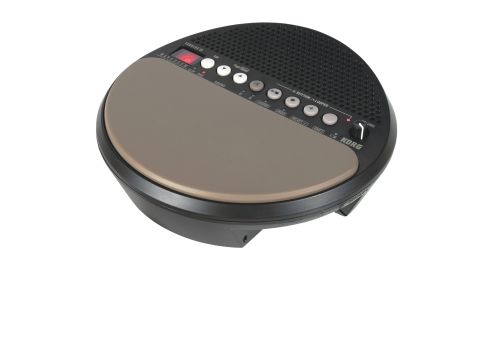 Slimming down the feature set loses a large part of the Wavedrum's appeal.

Korg's Wavedrum was always an unlikely product. Back in 1994, the original unit had plenty going for it but was a commercial failure thanks to its prohibitively high price.

To Korg's credit, the new Wavedrum WD-X, released last year, brought things up to date and lowered the price to an affordable level. We loved it, so we weren't surprised to see Korg follow up its success with the introduction of the new Wavedrum Mini, a slightly different take on a similar formula.

The Wavedrum Mini is smaller, lighter and cheaper than the WD-X, clearly pitching it at a different user - perhaps a singer-songwriter looking for accompaniment in a live setting rather than a percussion specialist or studio musician.

The inclusion of a built-in speaker and battery power option is pleasing to see, making the Mini significantly more portable and immediate than its big brother.

The front panel of the plastic case is dominated by a single large rubber pad, with the remainder housing the speaker, two-digit LCD screen, eight rubber push-buttons and a volume pot.

In addition to the (six AA) battery option, power can be drawn from a supplied DC adapter. The underside of the unit also reveals recessed sockets for the clip sensor, headphone output and unbalanced mono quarter-inch line out.

The whole Wavedrum concept relies heavily on the hands-on appeal of the drum surface, so attention inevitably focuses first on the pad itself.

It's immediately obvious that the Mini's pad is very different to the WD-X's skin. Firm to the touch and non-adjustable, the playing surface is closer to a cheap electronic practice pad than the WD-X's outstanding tactile skin.

Perhaps more intriguing is the inclusion of a clip sensor, which can be mounted onto practically any surface in order to provide a second trigger input. Hit the surface and the clip will sense the vibration, triggering the built-in sounds accordingly.

The Mini allows two 'sounds' to be loaded simultaneously - one to the pad and one to the clip. The terminology is slightly misleading since each sound can actually include a variety of drum sounds or melodic samples, with the output sound depending on the velocity and timbre of the hit that triggers it.

The Mini's sounds all come from preset PCM samples rather than the WD-X's various synthesis models, meaning that the larger unit's editing features are no longer applicable. In fact, most of the Mini's sounds can't be edited at all.

Some melodic sounds can be controlled by assigning scales to control note pitches, but most of the drum sounds are essentially fixed presets.

Ten built-in effects - combinations of reverb, multi-tap delay, phaser, flanger, pitch-shifter, step filter and overdrive - allow the sound to be tweaked, but don't make up for the absence of editable instruments.

A major part of the Wavedrum's appeal lies in its hands-on approach. We wouldn't expect exactly the same control from the cheaper Mini, but the unit's pad promises to respond to velocity, playing technique, strike position and strike tone.

Korg claims that the pad allows sonic variations to be introduced using subtle differences in playing technique. In practice, it's a lot less predictable than you'd hope.

Depending on the selected sound patch, firmer strikes in the centre of the pad tend to trigger more aggressive sounds like claps and snares, while hitting softly towards the edge of the surface tends to trigger the supplementary sounds such as hi-hats and percussion samples.

However, the interaction with velocity makes it hard to predict what sound you're going to trigger with any given strike. Unlike the WD-X, which responds well to sticks, beaters and brushes in addition to fingers and palms, the Mini responds best to bare hands.

The clip is essentially a contact mic, with a piezo transducer nestled inside to pick up vibrations from any object you attach it to. Like the pad, the clip responds differently to variations in the volume and tone of input sounds.

Attach it to a table-top and it'll behave differently compared to clamping it onto your shoe. The problem is that, yet again, it's quite unpredictable. It's possible to tone down the unpredictability with a careful choice of surface and technique, but then you lose the main appeal of the clip: if you're turning it into a reliable, predictable trigger, why not just use a trigger in the first place?

If, like us, you were hoping for the Wavedrum Mini to be a smaller, cheaper version of the WD-X, you're probably going to be disappointed. The Mini offers just a fraction of its bigger brother's feature set.

Most notably, the absence of sound editing options restricts you to the unit's presets, while the pad is nowhere near as controllable and expressive as the WD-X's tactile head. The clip sensor adds an interesting performance option but ultimately suffers from the same unpredictability as the pad.

The differences are so dramatic that it's probably unfair to make too many further comparisons. The Wavedrum Mini works as a simple accompaniment tool, with useful looping abilities, basic effects and the benefit of portability.

Unfortunately, there's only so much inspiration you can draw from preset sounds. After the Wavedrum's triumphant return, the Mini is rather underwhelming.