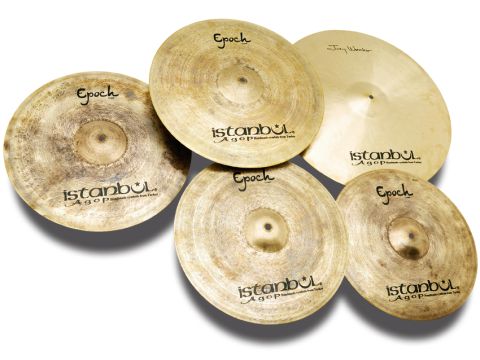 While being very different, these Signature models are outstanding examples of cymbal making. The Waronker ride is a beautifully poised and versatile cymbal suitable for all kinds of genres. The Epoch hats and crashes, meanwhile, are some of the most exciting cymbals we've ever heard.

The range now includes cymbals made for Cindy Blackman, Matt Chamberlain and Idris Muhammad. The Epoch hi-hats and crashes on review are follow up models to last year's Epoch ride. Commissioned by fusion legend Lenny White, the 22" ride got a big thumbs up and has since become a commercial success.

"While being very different, these Signature models are outstanding examples of cymbal-making"

Also on test is Joey Waronker's 24" ride, which is the first signature cymbal from the high-end freelance sticksman.

Individually cast from Istanbul Agop's B20 bronze, the Epoch cymbals have been heavily hammered, in particular the crashes. While the hi-hats don't wear quite the same abundance of pock marks as the crashes, they have still spent due time with a determined cymbalsmith.

Thick bands of deep lathing cover the cymbals on both sides (except for the bells), with slivers of raw bronze visible between the grooves. Some kind of buffing process has been applied to the cymbals as they catch the light, but beneath the brightness, patches of discoloured and pitted bronze are scattered across the width of each model.

They also possess the familiar Istanbul Agop trait of being covered in a fine patina of grime which rubs off on your fingers. Like the original Epoch ride, the hi-hats have a small bell; in contrast, the crashes feature well-proportioned bells (although in keeping with the overall flat profiles of the crashes, they don't rise much vertically).

Alongside the Epochs, Joey Waronker's 24" ride is decidedly clean cut. Tidily hammered and lathed, no handwashing is required after touching it. The huge expanse of bronze is broken up by Istanbul Agop's logo and a reproduction of Joey's signature.

For such a big cymbal the Waronker ride is surprisingly nimble. The stick sound is clear and focussed and is accompanied by an ever-present but unobtrusive wash. In keeping with its diameter, there is a wide, expansive feel to the cymbal but at the same time it is easy to control.

The bell isn't designed to operate in clang territory (unless shouldered, in which case it lights up); rather it gives an authoritative but appropriately musical response.

If the Waronker cymbal is a great all-round ride, then the Epoch models are probably more of an aficionado's choice; a selection of home-brewed ales next to a premium lager.

All of the Epochs are distinguished by their medium to medium-heavy weights. This bulk, combined with the amount of hammering and lathing present produces stunningly complex cymbals that also deliver a potent kick.

The hi-hats are bright and cutting yet at the same time warm and full-bodied. Received wisdom might suggest that such characteristics would cancel one another out, but these hats defy such conventions. Instead they produce a delicious blend of deep, earthy tones beneath the sizzling attack. Stepping gives a fat 'chick' while laying into them with a relaxed pedal foot leaves them fizzing with enthusiasm.

Where the hi-hats are assertive, the crashes are downright forceful. Each crash opens with a blast of high frequencies which slice through, giving impressive projection. The opening brightness nips back quickly but lingers on within a deeper - and still penetrating even while subsiding - decay.

With each step up in diameter the crashes get both louder and darker, and the 19" and 20" models make convincing crash/rides. In our experience, some cymbals - particularly loud ones - can be wearing when hit frequently over the course of a gig, but we found nothing of the sort with these. Their warmth and musicality made them a pleasure to play over and over.