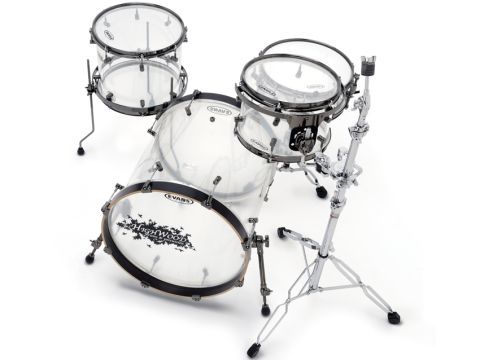 The return to favour of acrylic drums has snuck up on us slowly. Where HighWood's score is with the cast shells which mean there are no seams to come undone or to cause a break in the acoustic purity of the sound.

Gareth Heeley and Simon Eland have built an impressive reputation for their HighWood drums over the past few years. Up until now the drum kits have had wooden shells, which HighWood makes itself. Now, in keeping with today's trend, the boys are offering an acrylic range, although in this case the shells are bought in.

The great thing about HighWood's acrylic shells is that unlike most others, including vintage Vistalites, the shells are cast. The 'medical grade' liquid acrylic is poured into moulds, producing 5-mm thick seamless shells. These are much stronger and more stable than shells made from sheets of acrylic rolled into a tube and joined at the vertical seam.

By the way, don't be confused by the different terms which crop up when talking about plastic drums. They're generally made from acrylic glass. Plexiglas and Perspex are simply trade names for acrylics from different manufacturers in the USA and UK.

Once HighWood receives the shells it cuts a double (inside and out) 45 degree bearing edge, as with its wooden drums. You could request a different angle if you really wanted. Each glass-sharp edge is then hand polished and slightly rounded off, leaving head-to-edge contact of around 1mm.

The review kit has a 20"x20" bass drum with plywood hoops in dark brown stain and 16 lugs. The 12"x8" has a generic resonance mounting bracket, while the 14"x12" can either be mounted off a stand or with legs.

Tom hoops are heavy duty triple-flanged 2.3mm steel and drums come fitted with the now familiar mini generic lugs and neat resonance brackets. The black chrome hardware on this review kit works well with the clear acrylic, although you can have normal chrome if you prefer.

The 14"x5 1/2" snare drum has ten double-ended lugs and a solid generic throw-off. Since this snare was built HighWood has taken on UK distribution for the RCK throw-off (see Drum Foundry), which will be standard on all the future high-end snares.

Before playing them we always assumed that acrylic drums would be hard sounding, brittle, edgy and bright, just because the shells looked like glass. But having now tried several we've realised that the opposite is true. Acrylic shells have a warm, sensitive and deep timbre.

Some assumptions do hold, however. There's plenty of volume in reserve and the tone is pure and consistent throughout the set. Wood shells being relatively inconsistent may seem more characterful, but the consistency of acrylic, lacking unwanted overtones, is mostly a plus. Drummers have enough trouble with tuning as it is. The more the shells help, the better really.

Also, because the shells are stable and uniform you notice the sound character of the heads more. So head choice is possibly even more crucial than with your wooden kit. HighWood supplies Evans heads all round. You can specify single ply G1s or double ply G2s. In fact the toms had one of each so we tried them both ways up.

The G2 rounded the tone more, making it warmer and darker. Although the impact sound was clean, there was a suspicion of tubbiness, more boom than blam. The G1s gave that extra attack and brightness, which benefited the drums. We liked the punch that you get from tuning them a little lower than usual. Then again, when we tuned them high we got that amazing Billy Cobham Spectrum sound, rattlingly sharp.

The warm tubbiness works well with the snare, thickening up the sound. The drum came with HighWood's own, quality bronze 42 strand snare, although you can specify a standard 20-strander if you prefer. Whereas 20 strands might sometimes not sound snarey enough, with 42 the opposite is the case.

Still, there comes a time when it gets too rich, when you want something less luxuriant. We eventually swapped to a 20 strand and while mourning the loss of the ultimate fat snare response, it's probably a much more versatile bet for most drummers.

The 20"x20" bass drum had an EQ4 batter (single 10-mil with an inner, edge damping flap), with an intact G1 resonant. A wood beater worked best, resulting in a sharp thump followed by a fairly deep woof, then after a delay for the long shell, a rattle from the front head. If you're going to mic from the front this will need controlling. Maybe a 4" vent and/or some judicious padding? The batter, being quite small and already partially damped, didn't really seem to need it.