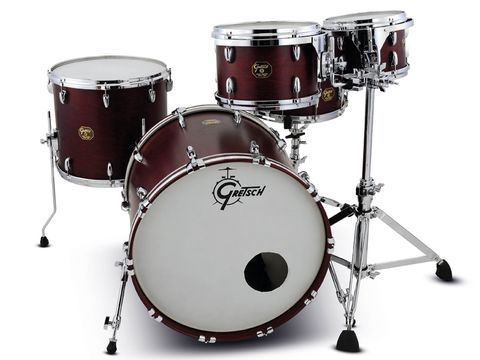 Gretsch drums are renowned for their unique sound and charismatic design, and the USA Standard range makes them more accessible wirhout demystifying the brand.

The USA Standard range provides a quicker and cheaper route to owning a set of Gretsch's prestigious American-made drums. The brainchild of Nick Moulin at Fender UK, USA Standard is exclusive to Europe.

Gretsch is a global brand that produces kits at most price points and has manufacturing bases spread around the world. It is also a company with a remarkable heritage that stretches back to the 19th Century, to the dawn of commercial drum manufacturing as we know it today.

Without dismissing Gretsch's excellent affordable kits that are made elsewhere, US-manufactured drums are what Gretsch's reputation has been built on.

The slogan 'That Great Gretsch Sound' says it all, and a roll-call of drumming greats from the past 100 years finds a significant proportion of them plying their trade behind a Gretsch kit. So if American Gretsch drums have a certain cachet to them, it's not without good reason.

Until now, the only way of acquiring a Gretsch USA Custom kit involved a wait of up to four months while Gretsch's small, close-knit workforce in South Carolina made the drums to order.

USA Standard has been devised as a fast-track process that limits the options without compromising the quality or integrity of the drums. Launched at this year's Frankfurt MusikMesse, the range consists of three shellpacks available in a choice of six finishes.

Gretsch has manufactured batches of all of the components, so USA Standard kits are effectively stock items with a typical wait of no more than a few days from ordering to delivery. They're also a good 25 per cent cheaper than an equivalent USA Custom kit.

As the range is limited strictly to the stated shellpack and finish options; any extra drums would have to be ordered via the USA Custom route, with its higher costs and protracted delivery time.

This last kit was the example sent for review. Snares are ordered separately from a choice of 14"x5" or 14"x6" models, of which we received the deeper version.

USA Standard drums are made in exactly the same way as USA Custom drums, and have the same level of care and attention to detail lavished on them.

Gretsch's celebrated six-ply maple shell formula - which has barely changed since the late 1950s - is employed across the kit. In a market filled with manufacturers offering new and more radical shell-construction techniques, it's refreshing to find a shell that epitomises the adage 'if it ain't broke, don't fix it'.

The key word in the shell description is 'formula', which hints at both a particular method and possibly another ingredient. There has long been speculation that Gretsch shells sound like they do because somewhere among the maple lie other plies of a different wood.

Gretsch refuses to be drawn on the subject, and why should it? As the shells are so central to the Gretsch sound, the company would have an understandable desire to keep the details secret. Suffice to say Gretsch maintains that the shells are near-identical to those produced half a century ago.

Bearing edges are cut at Gretsch's regular 30° on all of the drums, including the snare. The process of cutting the bearing edges is done by hand on a vintage routing table and is the responsibility of two longstanding employees.

Gretsch's fabled Silver Sealer coats the inside of the shells, while die-cast hoops are fitted to the toms and snare.

Bass drums come with matching wooden hoops, with the review drum's hoops having an additional pearl inlay. The bass drum also features new die-cast claws, which offer more protection to the hoop than the model they replace.

Applying Nitro-Cellulose lacquer is a painstaking process that takes between two-and-a-half and three weeks to complete. Each coat is applied by hand, as is the subsequent sanding between each coat.

Such thorough preparation makes for an unbeatable finish, and the Satin Walnut of the review kit is a lesson in understated beauty. Coated Remo Ambassadors, rebadged as Gretsch Permatone, are found on the snare and toms, while the bass drum sports a Gretsch logo'd coated Powerstroke.

The first thing that struck me was the openness of the kit's sound - the drums singing without restraint. The bass drum almost strays into uninhibited territory.

At 22"x18" with no dampening - other than the thin ring in the Powerstroke head - it delivers a colossally deep thud that is in no hurry to decay. In the marquee in which I gigged with the kit - normally a flat acoustic environment - the kick sounded live and resonant.

Eventually a minimal amount of external muffling had to be applied to make the drum mic-able. Tonally it was fat, centred and powerful, with each stroke creating ripples in the singer's trouser legs whenever he stepped too close.

A similarly open feel is present in the toms, with the thin shells and thin heads combining to great effect. The die-cast hoops help them cut through without encroaching on the warm notes that follow.

Plenty of woody body is present too, thanks to the 30° bearing edges. Fills between the toms and bass drum bring to mind Roger Taylor in all his majestic glory.

The snare gave an equally impressive performance, being as tonally distinct as the other drums and just as capable in the volume stakes. Sensitivity is excellent, and the spread of dynamics it offers indicates a seriously versatile drum.

From pulsating rimshots to shivering brushwork - and all stations in between - it reproduced everything faithfully.

Gretsch drums are manufactured by a small, loyal workforce that refuses to divulge build-secrets, further heightening their allure.

The USA Standard range, made to the same specification as all Gretsch drums by the same people in the same factory, means the possibility of owning a bona fide US-made Gretsch kit, with all of the heritage that comes with it, is now open to more drummers.