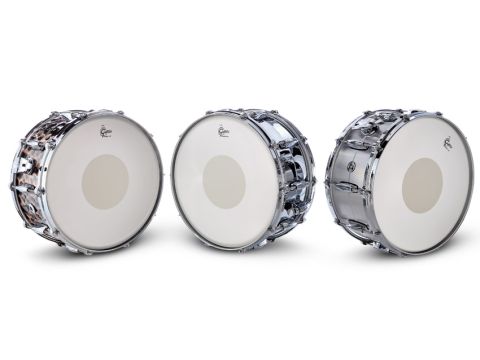 Beautiful drums with an air of history and classic quality but, given the pricing, we'd opt for the versatile brass snare every time.

Gretsch's USA-built G4000 series is an extensive collection of 19 professional metal snares. Today we have three sparkling examples in brass, copper and aluminium.

All three snares are 14-inch x 6½-inch, the only difference between them is the metal used for the shells. So we have chrome over brass, hammered antique copper and solid aluminium. Other options not reviewed are solid steel, hammered chrome over brass, spun brass and phosphor bronze, while optional sizes are 14-inch x 5-inch and 13-inch x 6-inch.

"The differences between the drums are smaller than you'd expect. We'd (very) roughly differentiate them thus: aluminium the sharpest, brass the fattest,copper the deepest."

Each drum has 10 double-ended Broadkaster lugs set on thick rubber gaskets. Gretsch's renowned, super-heavy die-cast hoops are fitted top and bottom. There's a decorative band of milling around the centre and a classic octagonal badge, similar to that used in the early 1980s. A large chromed air vent doubles as a snap-in drum key holder, another Gretsch characteristic.

The Lighting snare strainer, which dates back to the late '60s, is a most elegant design with a sensuously curved lever. It's also interesting in that the tension knob is on the butt side and not on the usual throw-off side. Some may not like this, but it's a perfectly logical arrangement that we're surprised has not been copied by others.

Both brass and copper shells are made by rolling 1.2mm sheet metal into a circle which is welded at a single vertical seam. The brass shell is unpolished on the inside and the welded seam is noticeable although completely invisible from the outside, which is thickly chromed.

Inside the beaten copper shell the seam is much more discreet. Both drums have 40° turned-over lip bearing edges and are perfectly round by our measurements. All three drums have wide snare bed dips, essential given the fitted 42-strand snares.

By far the most expensive of the trio is the solid aluminium shell drum, presumably because it is over twice as thick and meticulously cast in a single piece. The 3mm-thick shell has what look like reinforcing rings - or they would be if this were a wood drum.

But in fact the rings are of one piece with the aluminium with absolutely no joins anywhere. The extra thickness of the 1-inch-deep reinforcing rings broadens the shell edges to 5mm, enough to enable Gretsch to cut traditional-style bearing edges.

These have a 45° slope from the inside and a 1mm, 45° turn-over. The edge itself is sharp, though not enough to cut your heads.

These are big, heavy metal drums and so their most obvious use would be in rock and metal where volume is handy. Because the drums are so well built, though, they also have finesse and fine tones.

The batter heads are coated reverse dot CS Permatones supplied by Remo - a sensible choice giving plenty of resonance plus extra strength in the middle. Copper is less often used for snares than brass or aluminium but works just as well.

The beaten copper drum sounded darker, dirtier, wetter and looser than the other two. The centre back beat remained the deepest, the funkiest, whatever the tuning. It responded the best to lower tunings, suiting slushy New Orleans funk or dramatic, laid back and spacious rock ballads. Great for sloppy rolls and open clanking rim shots. Dirt rock.

The aluminium drum has a one-piece shell with no internal weld like the other two, so it should resonate better. But then it's substantially thicker, which should also elevate the pitch and volume. And so it turned out.

It always seemed to have a touch more ring off the rim shots, but at the same time remained the tightest, driest and crispest in the centre, the most concise. A rare combination. It's a refined sound, the tidiest drum, clean but sensitive.

Hard to say if the aluminium is capable of being louder or having greater projection, but it certainly feels like you're playing a formidable drum.

The least expensive drum is the chrome over brass, but it may just be the most versatile. Almost the opposite of the copper, it responded well to high tunings when it was bright and sharp but without the terse quality of the aluminium. It remained a bit fruitier. At medium tuning it seemed a tad fatter than the others.

We've tried to characterise the drums, but be aware the differences between them are smaller than you might expect - after all, they have identical heads, snares and cast rims.

These Gretsch USA snares are all beautiful drums with an air of history and classic quality about them. They're all perfectly circular, which is not always the case, even at this price.

There's a huge disparity in prices, the aluminium being by far the most expensive. It has a superb, one-piece cast shell but does not sound significantly better than the other two - just different. So you'd really have to convince yourself of the need for such a drum to fork out 50 percent more than for the brass drum, which for us is probably the most versatile.