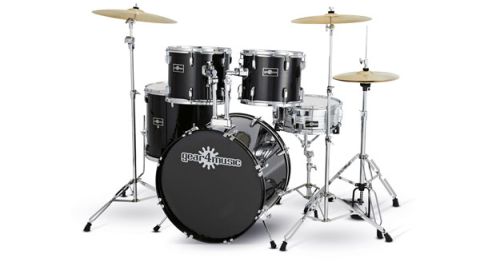 This kit offers amazing value for money and is capable of producing a reasonably good sound. On the whole it's well built, but at this level compromises are inevitable.

Now in its 12th year of trading, Gear4music.com is a primarily web-based retailer with a reputation for excellent customer service. Stocking pretty much any musical instrument or accessory imaginable, it also has large premises at its York HQ which functions like a regular music shop. As well as selling a wide range of premium brands G4M also markets its own budget lines.

Replacing the now discontinued GD-5 kit, the GD-7 is an all-in-one kit that includes five drums, three cymbals, all relevant hardware, a stool and pair of sticks. The package represents Gear4music's top budget kit, with the next step up being the more expensive (but still G4M-manufactured) WHD range. The kit is made entirely in China.

The majority of GD-7 kits will be bought online and all the components are shipped in one large box, with four of the five drums requiring building up before any playing can take place. Assembly instructions are available on the G4M website and the company is in the process of including a set with each shipped kit.

Of the offered finishes, the plain black wrap of the review kit is probably the most straightforward; unremarkable but competently fitted. The shells are made of basswood and are all 6-ply with straight butted seams.

Overall, they are accurately round with only the bass drum being close to tolerance. Bearing edges are cut at 45° with rounded peaks and are consistent from drum to drum.

Generic bullet shape lugs are found in proportions that range from adequate to meagre; it's not uncommon to find a mere six lugs per head on a budget floor tom (as is the case here), but to allocate the same number to the snare is unmistakable cost cutting. Further evidence of this can be found in the Pearl-style tom arms and insubstantial disappearing bass drum spurs.

Considering the number of stands supplied - hi-hat and snare, upright and boom arm cymbal stands, bass drum pedal and stool - the standard of the hardware pack is impressive.

With the exception of the stool, all of the tripods are double-braced, with the hi-hat stand being particularly sturdy; the bass drum pedal shares the footboard and wide chain and also sports unusual twin springs. Remarkably, the three brass cymbals - 14" hi-hats, 16" crash and an 18" ride - claim to be cast and hand-hammered.

As regular readers will be aware, heads have a disproportionately large influence on a drum's sound and we're struck by just how thin and flimsy the supplied heads feel.

Incredibly, some rival kits at this price-point are fitted with branded heads, but this is something Gear4music is unable to commit to at the time of writing. With no dampening, the bass drum produces a tympani-like 'boing' that is lacking in bottom end and punch. Cutting a port in the front head and putting in enough dampening to touch both heads calms it down and it begins to resemble a proper bass drum.

Replacing the wafer-thin G4M heads would undoubtedly improve its response further. It's the same story with the toms, which resonate wildly but offer little in the way of body or focus - they sound like the poor cousins of Keith Moon's toms on Live At Leeds.

Swapping the G4M heads for coated USA Ambassadors provides a remarkable transformation, bringing depth and no little power to the equation. To G4M's credit, a demo video of the kit on its website is filmed with exactly the same heads that are supplied with kit.

Considering the quality of the heads and the paltry number of lugs we have low expectations of the snare. But it's surprisingly good, giving a bright and lively response that cuts through, especially from mid tunings upwards.

Hit dead-centre it's clean and crisp, while rim-shots bring metallic overtones and a fitting lift in volume. Sensitivity is outstanding, with the wires buzzing into life for the gentlest of prompts, even right into the edges. In pure sound and playability terms, this is the most impressive drum of the package.

The cymbals, meanwhile, are also pretty decent and each diameter turns in a convincing performance.