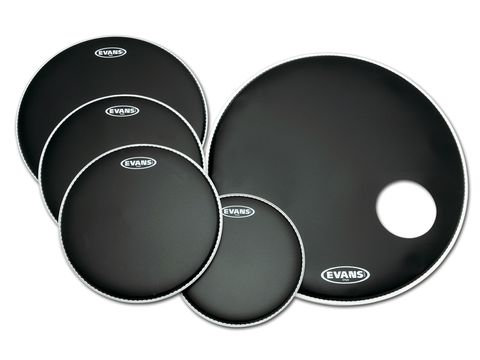 The Onyx line is a welcome addition for those who prefer Evans but also fancy black batters. While the sound won't suit everyone, the abrupt decay and thuddy sound of the bass head would be perfect for hectic double pedal work.

Evans's G2 twin-ply tom batters are popular choices for those needing harder wearing heads. Now Evans is offering a black-coated alternative, in the form of its new Onyx heads. While the aesthetic is certainly appealing, do they give a performance to match?

Standard G2s are formed from twin plies of 7mm Mylar. The Onyx, though, is a fraction tougher with two 7.5mm plies (as is Remo's equivalent Black Suede Emperor). Plus there's a new micro-clear matte black coating. Tom heads range from 6" to 20".

Onyx bass drum heads are different - a single-ply 10mm batter fitted with Evans's EMAD (Externally Mounted Adjustable Damping) system. The EMAD is a circular plastic sheath stuck around the head's perimeter into which you can slip either a 38mm- or 20mm-wide foam damping ring.

The Onyx front head is a 7.5mm single-ply EQ3 Resonant, again with black coating. This has an internal perimeter flap and a 5" offset microphone port, protected by braided edging tape. Sizes range from 18" to 26".

The Onyx sound is described as dark, short and attacking. But does the mere fact of the finish fool you into thinking the sound is deeper? We put a white Remo Emperor on one side of a 10" tom and an Onyx on the other - tuned them the same - and yes, the Onyx was darker and more abrupt, while the Emperor had fractionally more sparkle and sustain.

On a 13" tom the Onyx was even duskier, a bit subdued in fact. We tuned it higher than usual to hear it properly live. The 16" fared better. You want those deep tones on a floor tom and we found the sound rich and velvety.

Next we put a 14" Onyx on a metal snare. It had a clattering attack, rather hollow to start with. It benefitted from playing in, and by a second gig was thoroughly seated and feeling comfortable. The response increased in density, becoming almost calf-like - light centre strokes had the thick 'ch' sound of 'chalk', yet remained clear. This didn't prevent a healthy edge ring though, requiring a bit of damping.

The black surface has just enough nap for a modest brush response and it doesn't snag your wires in the way some new heads do.

Now why is the bass batter single ply when the toms are twin ply you're thinking? Well, with a foam EMAD ring in place the initial sound was tubby. We guessed a twin-ply construction would have deadened it completely. It must be the coating, because Evans's original EMAD batter is pleasingly fat. Even after some hours gigging, with the thinner foam ring still in place it was too thuddy, needing to breath more.

Discarding both foam rings worked better for us. The contact pitch was immediately brighter, the attack more lively, even a touch pingy, but offset by that nice deep undertone.