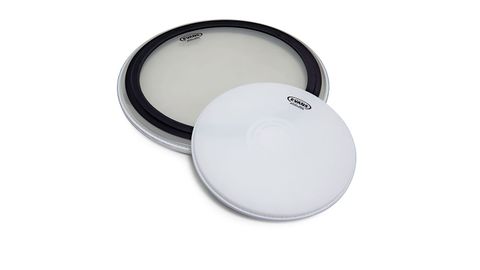 These Heavyweight heads do exactly what they say on the tin by delivering rock-solid heads for hard hitters.

You're mid-way through a gig and your stick shreds straight through your snare head. It's the ultimate drumming nightmare. Or putting the kick beater through your bass drum, now that's the kind of thing that wakes drummers up in a cold sweat. Evans' new Heavyweight heads may hold the secret to such gig-time catastrophes and sleepless nights.

The Heavyweight series aims to offer the ultimate in durability for your snare and bass drum heads.

The 14" snare head that we have here is firing firmly into the Remo Emperor X field, with its two plies of 10-mil film plus a three-mil reverse dot, effectively giving a beefy 23 mils at the centre where you need it the most.

Given that the Heavyweight snare batter head packs an astonishing 23-mil thickness you'd be forgiven for thinking that it would make your snare sound as dead as a dodo. Well, you'd be wrong.

Evans has done a superb job of packing-in maximum thickness without compromising dynamic range and responsiveness. We subject the head to several hours of rehearsals (playing a set comprised predominately of hard rock classics) and see no sign of head distress.

The bass drum head is an equally muscular proposition. On first installation, and without any dampening bar the EMAD rings supplied, we're greeted with a rich thud. Again, response is surprisingly sharp - despite the thickness you don't feel like you're smacking your beater against a brick wall.

However, the real test comes when we leave both heads in place on a resident kit at our local rehearsal rooms, opening it up to punishment by all kinds of players, from jazz tappers to metal smashers.

On our return a week later (in which time the heads have been played for more than 20 hours by eight different drummers) we are impressed to see minimal sign of the heavy-handed playing that these heads will have borne the brunt of. A test most emphatically passed.