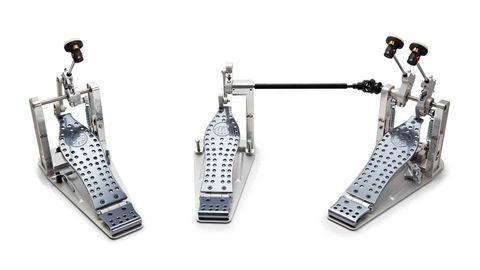 The only price to pay for the technical perfection offered by this pedal is the price itself, which is best learned when sitting down.

The hardware equivalent of California Custom Shop drums, DW MFG (an abbreviation of DW Manufacturing) is intended to showcase unashamedly high-end, US-made pedals and hardware; if this first fruit is anything to go by then we have much to look forward to.

Launched at NAMM 2014, the MDD pedal is currently available in the single and double guise reviewed here; a left-sided double has not yet been slated for release.

Something of a departure from DW's familiar pedal designs - which though not short on innovations or features can nonetheless be traced visually back to the firm's original 5000 series pedal - the MDD looks more like the product of a Formula One team.

Its arrival is the realisation of a three-year project which has 'consumed the life' of DW Production and R&D head Rich Sikra. And not for nothing, as the MDD is effectively a ground-up redesign, sharing only around 10 percent of components with existing DW pedals - everything else is new.

Aluminium dominates the construction, with some parts - such as the direct drive cam - being machined from solid blocks; in fact it's almost easier to spot the components that are made from other materials.

The pedal's layout is relatively conventional but has clearly been designed with no little panache. The two upright posts have clean lines and feature cigar-shaped apertures along with polished outer faces.

Stowed inside the right-hand post is the spring tensioning mechanism which is operated by turning a bolt with a drum key. Making adjustments is not only comfortable (compared to fighting with the equivalent knurled nut held tight by the spring's tension), but can be done with an almost unprecedented degree of accuracy.

Taking centre stage is the perforated solid aluminium footboard which has been anodised in a shade of gun metal and then highly polished. This tails into DW's patented Delta Hinge before continuing on, ending with an elegant fold in the contoured heel plate.

The direct drive assembly of linkages and pivots that connects the footboard to the cam is similarly striking and makes a complex piece of engineering seem logical and straightforward - exactly as DW intended.

A wide spread of adjustment is again possible and, despite our best efforts, there is absolutely no lateral play to be found at all. Further fine-tuning can be achieved by adding up to four brass weights to the back of the beater head, which is itself an all-new design with three different faces to choose from.

DW studied the geometry of direct drive pedals and wanted the feel of the MDD to appeal to chain drive players; it would seem to have achieved this aim.

The pedal can be set up with a surprisingly natural and smooth action that seems to glide the beater into the head. At the turn of a few bolts it can be reconfigured at the other end of the scale to reveal an aggressive speed-driven machine more suited to barrages of blast beats. In all the other points between these two extremes it is the dictionary definition of precise.

Once set at our preferred stance it soon begins to feel like an extension of our foot rather than a mechanical interface - if anything is preventing us from carrying off adventurous-to-the-point-of-mindless kick flurries, it's our technique.

The MDD is also the quietest pedal this writer has ever played; it is completely - and we really mean totally, utterly, pin-drop territory - silent.

If the single MDD leaves us with the hint of a smile on my face, swapping it for the double finds us breaking into a near manic wide-eyed grin. The sense of equilibrium in the response is uncanny; it is genuinely impossible to tell both sides apart.

Suspecting that we're being a little too credulous, we try playing the slave pedal with our right foot but we're not mistaken - it really is that close. Clearly no stone has been left unturned in the development of this pedal and, while it is expensive, the results are exceptional.