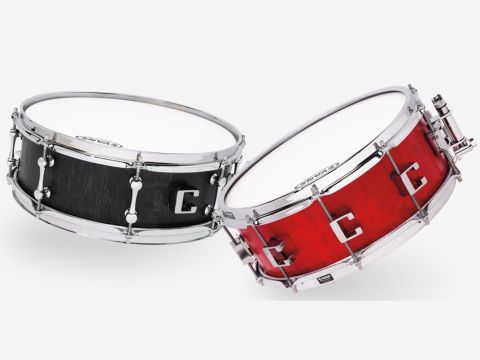 Dave Carrera is as passionate an advocate of all aspects of drums and drum making as you could hope to meet. With more snares in the pipeline and the first Carrera kits around the corner, we are certainly going to be hearing more from the man and his company soon

Carrera Drums is based in Chesham and began production in August 2009. Named after its founder, Dave Carrera, it's the realisation of a lifelong dream for the London and Bucks-based drummer.

The first Carrera drums to be built are snares, of which examples from the Classic and Classic Custom ranges have been sent to Rhythm.

A drummer for over 25 years, Dave's experience has led him to the conclusion that there are huge numbers of drummers playing every week in pubs, clubs and rehearsal rooms without access to PA systems. With this in mind, these drums have been designed to perform strongly in un-miked situations.

To achieve this aim of acoustic superiority, the chosen shell material is birch. Dave buys in grade A Finnish birch that is supplied in sheets that are already three plies thick.

Each ply is 0.5mm in thickness, making a total measurement of 1.5mm.

Dave has settled on a standard shell construction of 12 plies at 6mm thick, with all the plies unusually arranged with the grain running vertically. This is to encourage a faster transfer of energy from the batter head, in theory making the drum both more attacking and more responsive. The sheets of ply are bonded and left to set in traditional moulds for two days. Once dry, the shells are worked by hand, being first squared off and sanded down before having the finish applied.

Next, the bearing edges and snare beds are cut, again by hand, before receiving a final sealing of wax. After being signed, numbered and dated, the shells are then dressed with hardware. In a nod to the old Premier practice, the shells are undersized by 3mm in order to ensure a positive contact with the heads.

With an all-vertical ply configuration, the cutting of the bearing edges has to be done with great care. Dave cuts them at 45° with a small backcut and then very slightly flattens off the point. The results are spot on.

Though built around near-identical shells, the pair of review drums differs considerably in terms of finish and levels of equipment. The smaller of the two drums is a 14"x5" Classic model and has eight tube lugs, triple-flanged 2.3mm hoops, a generic snare throw-off and snare wires. The black wax stain has a satin-like finish that allows the grain of the wood to be visible beneath.

Retailing at a higher figure is the red 14"x5 1/2" Classic Custom snare. This is fitted with 10 double-ended C-shaped lugs (die-cast and made in High Wycombe to Dave's specifications), S-Hoops, a Dunnett snare throw-off and butt end, plus WorldMax snare wires. A subtle hint of sparkle is buried in the deep red stain, which again allows the wood grain to flow through below. Dave creates all of his own stains from scratch and so offers a limitless array of different shades for that one-off custom look.

Both drums are fitted with an Evans G2 coated batter head and a Hazy 300 resonant. At the time of writing it was understood that all future Carrera snares will come with Aquarian heads as standard.

Of the two models, the 14"x 5" Classic has more of an open feel. Its sharp, snappy note is bolstered by warm harmonics that add to, rather than compete with, the overall sound. The snare's tonal colours, generous sustain and all-round willingness suggests it would shine in a jazz or old-school funk setting.

The 14"x 5 1/2" Classic Custom snare has a more focused and harder-edged feel. There is more depth to it - particularly when hit dead centre - but there is still a brightness and clarity that finds it zinging with enthusiasm. Like the Classic model it also is super responsive, requiring only the faintest of strokes to come alive, and all whilst shod with a twin ply head.

Dave Carrera says that what has driven him from the outset with these snare drums has been a desire to reproduce the ideal snare sound that he carries around in his head. On this impressive evidence he must be pretty close, as these drums are full-bodied, musical, and crackle with energy.