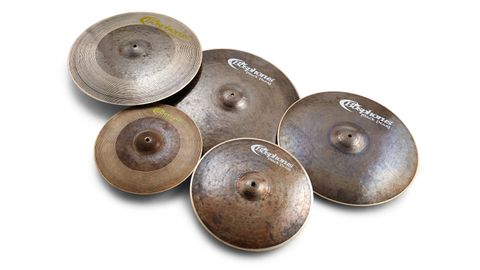 Seeking to fuse the best parts of its high-end cymbals, and broaden its involvement in world music. The Samba series are capable of much more than just Latin music too.

Istanbul-based cymbal-maker Bosphorus have sent a Samba Series crash/ride and hi-hats to play with.

The Samba Series cymbals are a 20" crash/ride and 14" hats, which have an unlathed section from the bell until halfway across the bow, and then a sort of spiral groove lathed section to the edge. They were developed firstly specifically for Brazilian music but have a wider appeal.

Bosphorus says that the range is aimed at those jazz players looking for that classic Turkish sound, but owing to the sizes available it hopes to see players in other genres giving them a go.

Apparently the rides have been developed to work well as large crashes in rockier music, and Bosphorus has even developed 16" hi-hats and a 26" ride - time to start buying new cymbal bags and give the postie a raise!

The Samba ride sounds open with a brighter fundamental compared to the recently-reviewed Black Pearls (which we had on test at the same time), but still at the darker end of the spectrum. Surprisingly, the bell isn't as defined as expected, but this is made up for by the articulation it is possible to evoke, quite complex patterns staying well under control.

The Samba hats are bright and, while dry, cut through to the point that they could be used as your main pair. They 'bark' well when struck open and quickly closed with the foot, and rapid sticking remains discernible with ease.