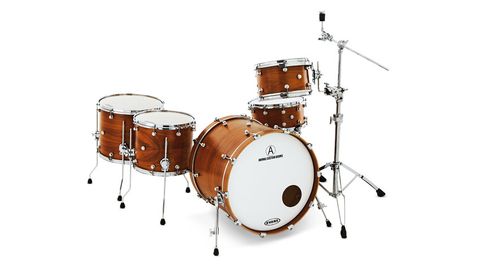 Animal takes a big leap forward with the 2012 series which displays genuine craftsmanship with its thin shells, lightweight aluminium lugs and gorgeous finish. Above all, the drums sound terrific.

Carl 'Animal' Gavins started his Animal Custom drum company in 2006. He has a workshop in Wakefield and has invested heavily in his own shell-forming moulds. With the aim of making Animal distinctive in the crowded UK custom build market, Carl has decided to rationalise the Animal output to a single line of top class kits and drums, the 2012 Series.

Consequently the previous Elite and LT Series are now discontinued. Animal's goal is eventually to produce all its own hardware as well as shells and thus achieve complete distinctiveness.

American walnut was one of the popular woods of early drum-making and has made a small comeback in recent years. It's an attractive rich brown grained timber and provides the inner and outer cladding for our review drums.

Animal shells are produced in a similar way to Yamaha's air seal system. Plies are layered up and glued individually inside the mould. The plies are so thin there's no need to wet them or use heat for bending and bonding. An air bag is inflated inside the mould and the shell is cured for 24 hours before removal.

Carl uses top grade Finnish birch as standard, but customers can specify maple or mahogany if they really prefer. The snare and toms have an inner core of 6-ply 3mm-thick birch plus an inner and outer 0.6mm veneer of American walnut, giving a total shell thickness of 4.2mm. The bass drum has a 12-ply, 6mm thick core of birch with the same 0.6mm inner and outer veneer, totalling 7.2mm.

You may notice that on the snare drum and smaller floor tom the outer veneer is laid in two halves, butting together horizontally in the centre of each shell. Carl explains that this 'book matching' "often gives a more interesting pattern, which I wanted to show. Both options are available so I did both on the one kit. The kit is for me so it didn't matter about combining the two options."

The shells are richly finished by applying numerous (up to 20) thin coats of hardwax satin oil, each wiped off to give a uniform surface. The shells are accurately round and the 45° bearing edges are level. Butted joins of the veneers are almost perfect, though in a couple of places there are the tiniest of gaps. We are being ultra-critical here, but all the same, Animal has to stand comparison with the best mainstream manufacturers who get this spot-on.

The bass drum hoops are a matching walnut veneer and the edges of the hoops are left quite sharp. They might benefit from a gentle sanding down and rounding off, though it's really a matter of taste.

Animal's aim is eventually to produce all its own hardware components as well as shells. This is an expensive business, but in the meantime the main thing is the lugs, which give drums their identity.

And Animal does have its own lug, a solid machined lightweight aluminium design, small and circular with just a single fixing, mounted on a hard rubber gasket. There is no swivel insert which means no leeway for error when threading.

Since the drums are accurately made this should not be a problem, but care must be taken or you might encounter cross-threading. The tension bolts have both steel and rubber washers. Complementing the lugs, in the same style, there is the circular 'A' badge.

Other metal work is for the time being generic. Hoops are 2.3mm chromed steel, spurs and small tom mount are familiar Gibraltar designs. Floor tom leg brackets came with memory locks. These particular memory locks did not slot into the receiver blocks in the way proprietary designs do.

To be honest you don't even need memory locks, but it does illustrate why Carl will not be fully happy until his company designs all hardware components as well as the shells.

The snare drum is fitted with top quality PureSound 24-strand snare wires and Trick Percussion GS007 chrome-plated strainer and butt plate (or you could opt for an equally top-notch Dunnett). All fittings are mounted on hard rubber gaskets.

Shallow toms are all the rage and they help with definition and projection. Although they might sound a little toppy from the driving seat, from out front they have clarity and plenty enough depth. The speedy response is offset by the warmth and woody resonance due to the shells also being thin. Plus the slightly spongy feel of the double-skin Evans G2 batters.

It's a winning combination which makes the three well-balanced toms great to pummel. We were so enthused we just had to dig out some of those brilliant Jason Bowld tom grooves off the Rhythm magazine covermount CD.

This recipe of thin shell and walnut comes into its own even more exaggeratedly with the 22"x171⁄2" bass drum. It came fitted with an Evans EQ3 clear batter, an impact pad and double rubber hoop protectors, while the front white head has a 5" offset hole.

Without tampering with it we just attached a bass pedal and got one of the most thunderous responses we can remember. A gigantic, heart-stopping wallop. It would be almost brutal were it not for the dark timbre of the thin birch-walnut shell again. No hesitation in recommending this one for anyone who wants a cracking big sound.

The effect carries on with the snare. If you make a snare with a thin shell of wood ply it will have a dark timbre. And the deeper the shell - this one is 61⁄2" - the deeper it will be in tone. The reinforcing rings possibly brighten and control that a tiny fraction, but these are not like the big thick half-inch solid maple or beech ones of old.

They are just a sliver of minimal width and I doubt if they constrict the shells much, they just strengthen and stabilise the edges. This is particularly useful on the snare drum where head tensions might be high.

The result is that when we got on stage with this one there was that familiar, characteristic thick crunch, something you don't get from a metal snare, which will always be somehow cleaner. In summary this proved to be a powerful, resonant snare with an inherently dark nature.