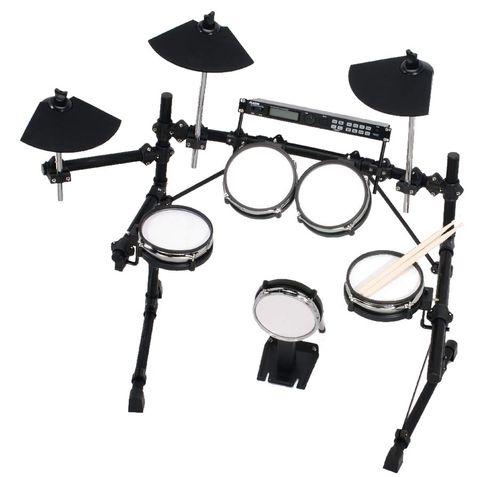 As far as pocket-friendly electronic set-ups are concerned, the DM5 Pro makes a very convincing argument. You have to make allowances for certain aspects of its specification, but as a sub-£400 package there's really nothing terribly off-putting about it. It certainly feels more sophisticated than the standard DM5 and, particlarly if you're after a home-friendly kit, it'll make for a great partner.

Alesis´s DM5 entry-level electronic kit is a rubber pad set-up harnessed to the company´s long-standing DM5 sound module. It´s not the last word in refinement by any means, but the rig nevertheless delivers decent value for money. Alesis clearly believed that improvements could and should be made however, and subsequently came up with this ‘Pro´ offering.

The standard DM5 kit sported a rack that wasn´t weedy as such, merely a bit basic. A simple flat, square design, it did the job but with little sense of style. And while the Pro rack is still very straightforward, it looks and performs better than the original.

The most significant single improvement is the use of a curved front bar - it might seem a minor point but it allows for more comfortable positioning of the pads attached to it, and it adds to the Pro´s appearance too. The use of reinforcing arms that run between the curved bar and feet uprights also increases stability over the standard DM5 kit. The Pro does away with the slightly cumbersome middle and bottom rack bars of its older sibling (on which the bass drum pad and pedal were mounted), and this again improves the sleekness of the set-up.

The kick pad and the pedal are now ‘standalone´ units, with the pad supported by straight legs and the pedal being attached to it in the usual clamping fashion. There´s just something familiar about the arrangement that feels right. You definitely need to mount the kit on a carpet (or similar) to prevent bass drum creep, but the whole thing is much more professional.

The feeling remains, however, that this is a set-up designed to be set and stay put, rather than be transferred regularly between venues. Everything´s nicely sturdy, but each of the many clamps is operated by a drum key - and there´s a higher degree of fiddling around necessary to put the package together than would be appropriate for a kit that moves between rehearsal space and stage a couple of times a week.

With a big enough vehicle, there´s no reason why you couldn´t carefully transport the DM5 Pro as a whole - with bits like leads and brain removed - but ‘careful´ would be the watchword here. And you wouldn´t want to risk it regularly.

While the rack is one of the important upgrades of the DM5 Pro, the pads that hang from it are another even more compelling reason to check out the kit. The originals were simple rubber slab affairs - perfectly well-made and capable within their limits, but not the most rewarding things to play, naturally.

At first glance you´d be forgiven for thinking that the Pro version has been blessed with mesh heads. In fact, it hasn´t. Instead what we have are pads with plastic heads, that are otherwise similar to mesh head types. The ‘drums´ consist of a cast plastic chassis, a very short ‘shell´ and triple-flanged hoops, so they feel like real little instruments. What´s more, four lugs enable the heads to be tensioned, which ensures that the response can be tailored to taste.

The feel of the pads under the stick is very positive and a little less ‘boingy´ than some affordable mesh heads tend to be. Of course, nothing quite replicates the raw energy that you get from whacking an acoustic drum - and there´s nothing here to vibrate in sympathy with the head. But we like the tactility of the pads.

The cymbal pads are also changed for the Pro. And they put us in mind of Yamaha types - they´re simple, bell-shaped units that clearly make no attempt to ape the feel of real cymbals, but are still perfectly playable. The hi-hat is a budget solution - a straightforward cymbal pad allied to a plastic pedal, but it performs as well as any of these entry-level types do.

You obviously lose a great deal of subtlety with such things, but given the tasks to which the DM5 Pro is likely to be put, this is no real drawback.

At the heart of the set-up remains the venerable DM5 module. Even last year we pointed out that it had been around an awfully long time - and it´s further from the cutting edge now than it was back then.

Having said that, it still holds its own in this rig. With 21 kits on offer here (comprising a total of 500-odd sounds), and simple editing, the brain will not bog you down with endless options. Neither will it confuse with pages of parameters to fiddle with. Sure, other, much newer modules leave it in the dust as far as realistic acoustic sounds and editing depth, but anything that is delivering significantly more than the DM5 will also set you back accordingly.

Where the unit scores extremely well is in its ease of operation. And given the welcome upgrade in terms of the pads and the rack, now more than ever it would suit the keen-but-cash-strapped studio rat who is looking to play beats in to a PC/Mac sequencer.

What´s more, the DM5´s proven trigger-to-MIDI capabilities are as useful now as they ever were in both studio and live/rehearsal situations. Hooked up to an external hardware sampler that is filled with your own sounds, the DM5 Pro might well come into its own in a way that the standard DM5 kit never quite did.