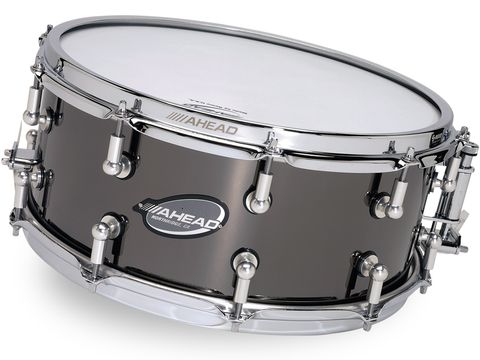 Quick-release lugs look set to become a standard feature on many drums and Brunson lugs are neatly designed, well-crafted examples. Whether or not the package as a whole performs better than the existing Ahead brass snare drums is another matter. Without hearing them side by side it's impossible to say.

When hi-tech synthetic stick manufacturer Ahead first diversified into snare drums back in 2006 it met with instant success. The black-chromed, brass-shelled snares that it launched to acclaim have since been joined by maple and Wenge Vert (West African hardwood) models.

The latest version returns to a black on brass shell and features Ahead's own quick-release lugs.

The lugs are named Brunson lugs after their designer Scott Brunson. Made of aerospace-grade aluminium 7075, they are compact, elegant and extremely light. They anchor onto fixed round studs, also in aluminium, which sit proud from the shell. Rubber grommets line the holes where the studs pass through the shell to prevent any metal-on-metal contact.

Fitting the lugs is a question of simply sliding the circular bulge in each lug over the stud and then tightening the tension rods. Ahead claims that an advantage of the rounded couplings used in Brunson lugs is that they will compensate for any misalignment of the hoops or tension rods.

Brunson lugs are also available to buy separately and can be retro-fitted to most drums with single mounting holes. Though they are super-light, and therefore good for resonance and sustain, the lugs would appear to bring stresses of their own, as the shell has been beefed up to 1.5mm thick from the 1mm of the original snare.

Ahead says that this is to prevent possible distortion at very high tensions.

Lugs and shell thickness aside, the drum is largely similar to the tube-lugged version and is equipped with S Hoops, Fat Cat snare wires and a Dunnett snare release, while the black chrome finish is as sumptuous as ever. Currently Brunson lugs are only available on the 14"x6" model, though Ahead has plans for a 13"x6" Brunson lug drum.

Unlike the original Ahead snare, we found that this drum needed a lot of tweaking to get the best out of it, but once it was in the zone it came to life. The usual characteristics of brass are present in the form of bright, cutting attack combined with a warm, slightly dark tone. The thicker shell of this snare gives it serious projection whilst still sounding musical.

Brass drums are also known for their liveliness and straying away from the central portion of the head, overtones soon appear. By the time the edges are reached you'd be forgiven for thinking that the drum was reproducing feedback.