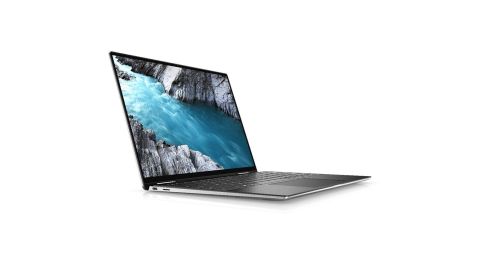 An excellent laptop certainly, but one built for pro audio? Possibly, but you may need to limit your ambitions due to common Windows problems rearing their heads.

The XPS range is Dell’s answer to the long-time dominance of the Apple MacBook Pro line. For creative pursuits, there really has always been a clear winner and it’s taken time for Windows-based machines to catch on that not everybody uses a laptop solely for spreadsheets and email.

That does seem to be changing though, with brands like Dell and Microsoft very clearly gearing new product lines towards those looking to use them for creative work. The Dell XPS range, like Microsoft’s Surface roster, are a million miles away from the boring grey boxes we see in offices everywhere. They’re sleek, modern and powerful, and giant leaps have been made when it comes to aligning their spec with what’s required by the prosumer market.

The Dell XPS 13 we’re looking at here is, at its core, a beautifully-designed, well specified laptop. It has, on paper at least, enough power to handle music-specific applications like Digital Audio Workstations (DAWs) and, while the inclusion of USB-C connections may cause dongle fever in the short term, these things should ensure the XPS has a decent enough lifespan. Design-wise, the Dell XPS 13 is hard to fault. It strikes that perfect balance between striking visual aesthetics and canny industrial design, and doesn’t look out of place next to any of the Apple alternatives.

Clearly, the operating system is as important as the hardware, and Windows 10 is – for the most part – a highly usable, configurable system. That said, it doesn’t suit music and audio production work quite as well as Apple. That’s not us on the Apple hype train, it’s a fact borne out by years of experience using both systems. If you’re used to using Mac OS, and are considering a Windows machine for audio work, you’ll need to prepare yourself for certain issues around audio drivers. Not all are insurmountable, but they do warrant consideration. More on this later.

It would be remiss of us to write about the Dell XPS 13 without mentioning the screen. The 4K touch-enabled model we reviewed was, quite simply, incredible to look at. Our DAW and various other applications looked absolutely stunning. Realistically the screen isn’t as high on the list of priorities for a music producer, but we couldn’t help but be blown away by what was in front of us. Whether that swings things is entirely your call, but it is a damn fine looking machine. But how does it cope with audio? Allow us to delve further…

Looks and aesthetics are all well and good, but if you’re considering purchasing a Dell XPS 13 for music production then you’ll want to know how it performs under pressure. The model we reviewed has a healthy amount of power under the hood, with a 10th generation Intel i7 processor, 16 GB LPDDR4 RAM and a 512 GB solid state drive more than meeting the base spec outlined by all major DAWs. Connectivity comes via two Thunderbolt 3 ports, which take care of power delivery and DisplayPort, and there’s a 3.5mm headphone/microphone combo jack and microSD card reader.

The first thing we did, and we’d advise you do the same, is spent some time optimising the computer for performance. This meant disabling all the nice-to-have visual elements within Windows 10, and also tweaking the power management and sleep cycles. The XPS, like many Windows machines, also comes with plenty in the way of ‘helpful’ (not helpful) bloatware which you may or may not find useful. Discarding, or at least disabling, that freed up some space on the SSD and also lessened the risk of annoying background activity hogging that precious CPU power.

With the performance needle in the right place, we looked at some of the more audio-specific optimisation we could do. And, as any Windows user will attest, this isn’t always the easiest task. As the XPS range are designed as great all-round laptops, this means they are geared towards providing a great experience for the average user. There are certain apps and functions which are great for watching Netflix, for example, but cause conflicts when used in conjunction with dedicated audio drivers and the like. With the XPS, this means Waves MaxxAudio Pro. For sure, it gives you great control over audio for media consumption, but for our purposes it had to be disabled so there were no conflicts with our dedicated audio drivers.

The final step in our setup involved hooking up an audio interface. We opted for the Presonus Studio 24c due to its USB-C connection, meaning the transfer of information would be quick and reliable. The Focusrite range also comes with dedicated ASIO drivers, so we felt confident enough the audio would be latency-free and clean.

With everything setup and in place, we fired up our trusty copy of Ableton Live 10. To get an idea on overall performance we loaded up an existing project from an external SSD, which had 20 tracks of various audio and MIDI, along with plugins and soft synths aplenty, and a basic four-minute arrangement in the timeline. This proved no problem for the XPS, with loading times on a par with our hefty desktop machine. Audio played back cleanly and without juddering, with the CPU meter hovering around the 30-40% mark. Again, in line with what we see on the desktop. Rendering times were more than passable, thanks to the Intel i7, and we didn’t encounter any major problems streaming from large sample libraries thanks to both the USB-C connection and large internal SSD.

More of a concern was the noise from the fan. As the system is being put under relatively extreme pressure when processing and playing back all those plugins and audio clips, the internal fan boots up to keep the CPU cool. Here, there was a noticeable difference from our desktop unit, where cooling is a much more restrained affair. It’s not a criticism of the Dell, as such, more a warning that if you’re recording acoustic instruments then you do face the challenge of either recording away from the laptop or cleaning up the recorded audio later.

Audio drivers, so often an issue for non-Apple users, did seem stable in our tests, with no latency or signal degradation, although only because our setup was relatively simple. If, for example, you’re looking to use multiple audio applications simultaneously – say Maschine and Live at the same time – then you’re potentially looking at some serious headaches. Keep things simple, however, and you should find the Dell XPS 13 a neat little travelling companion.

The centrepiece of a pro studio it is not, but as portable do-it-all machine you could do a lot worse than consider the Dell XPS 13. Just be prepared for some internal wrangling and reconfiguring, as you would with any Windows machine, and you’ll be fine.

"With its much-improved webcam and longer battery life, the Dell XPS 13 is still among the very best the world over, even if it may not have our sought-after ‘Best in Class’ label anymore." TechRadar