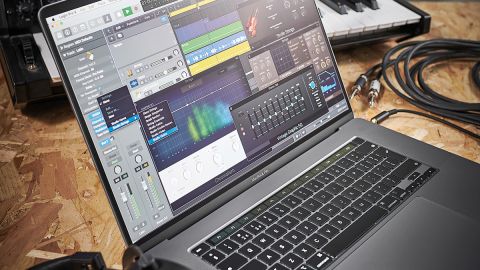 An excellent laptop and an improvement on the previous model in some key areas, but some elements may still grate on musicians.

Attracting fans and detractors in equal measure, Apple hardware is still the go-to for a many pro and hobbyist musicians and, with its balance of specs and portability, the MacBook Pro remains a smart laptop choice. So what does this new model offer producers?

While there’s an extra inch of screen over the last one, Apple has reduced the border around it, so this MacBook is only a few millimetres larger, and marginally thicker and heavier, than its predecessor.

The extra thickness is down, in part, to the updated keyboard, which replaces the unpopular ‘Butterfly Switch’ model of the previous generation. Here the keyboard uses Scissor Switches, similar to those found in the iMac keyboard. Elsewhere, the mic and speakers have been overhauled.

The battery here is updated to a 100-watt-hour unit, the largest allowed on flights by the FFA. Battery life is impressive compared to previous models and rivals, so you can get plenty of work done on the go.

This is the first MacBook Pro configurable to 64GB of RAM and 8TB of SSD hard drive space too. Both are seriously tempting for musicians - you could conceivably store and run massive orchestral instruments on the machine itself.

First up, the screen looks great - working in your DAW you will notice that extra space - while the new keyboard feels nicer to use and should prove more reliable in the long-run. Many users of the previous model (FM’s own art editor included) had problems with the keyboard not living up to regular shortcut use - an important factor for DAW users.

The speakers are the most powerful we’ve heard on a machine this size, with excellent stereo imaging for a laptop. While, obviously, you still won’t want to use these for mixing or production duties, they’re a nice touch.

Similarly, while it won’t replace your top-end valve mic anytime soon, the built-in mic has an impressively flat response and low noise floor. We tried sampling a few found sounds, finger clicks and claps and it did surprisingly well. In a quiet room, it’d cope with recording podcasts and basic voiceovers.

There are a few music-specific caveats. As with the previous model, you’re limited to four Thunderbolt ports and committing to a life of adapters and hubs for your USB MIDI gear. This MacBook also uses the same T2 Security Chip as the previous one, which has caused issues with USB 2.0 audio interfaces.

Finally, it comes running macOS 10.15 Catalina, which still has compatibility issues with some plugins and DAWs. Ultimately, these are things that both users and the industry will likely end up adapting to, but, for now, it’s worth noting them.

MusicRadar verdict: An excellent laptop and an improvement on the previous model in some key areas, but some elements may still grate on musicians.

"The MacBook Pro 16-inch isn't just the most powerful MacBook Apple's ever made – it's also the best. By listening to its customers and taking on board the criticisms of previous models, Apple has made a MacBook Pro that improves on nearly every aspect of the iconic workstation. If you have the budget for it, this is one of the best laptops you can buy." TechRadar