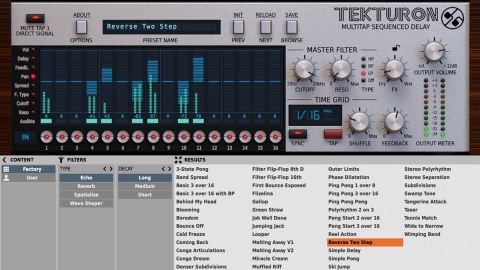 Tekturon is a Pandora’s box of rhythmic and spatial delay possibilities.

D16’s third delay plugin - joining Repeater and Sigmund - is its most creatively ambitious yet, giving the user completely independent control of 16 individual delay taps in terms of timing, levels, feedback, stereo imaging and filtering, within a step sequencer-style interface.

Although there are surprisingly few plugins around that do it, this multitap delay ‘sequencing’ concept isn’t new by any means, so Tekturon (VST/AU/AAX) has its work cut out when it comes to making its presence felt among the competition.

Tekturon’s interface is neatly organised and intuitive. At the top are buttons for opening D16’s standard browser (which pops out below the control panel), stepping through presets and accessing the preferences. The most important of those preferences is the Processing Quality, which allows you to trade off CPU usage against sonic fidelity - defined for both Real-time and Offline usage - by selecting one of four settings for each: Draft, Medium, High or Ultra.

On the right are a handful of Global parameters, including dry/wet mix, Master Filter (see Fully filtered), Feedback, delay time settings, and Output level control and metering. On the left is the main multipage display, where you’ll spend most of your time with Tekturon, editing the 16 delay taps.

The buttons on the left-hand side of Tekturon’s display switch between eight editor pages, each governing a specific delay tap parameter. The taps themselves are represented as 16 columns, each of which is activated in the Volume page by raising its level slider.

Meanwhile, the ever-present Audible light illuminates when Volume exceeds 0, so you can always see which taps are active at a glance; and the In buttons along the bottom mute the inputs to their corresponding taps when deactivated.

Essential to the effectiveness of any multitap delay is a quality filter, and Tekturon’s, we’re happy to report, is a beauty. In the Global section, the Master Filter controls set base Cutoff and Resonance values, as well as the filter mode (High-Pass, Band-Pass, Low-Pass or Off) deployed for all taps by default. Dragging the bipolar sliders up and down in the Cutoff and Resonance pages of the main display then offsets these values for each tap, enabling sequencing of the filter throughout the delay pattern, with the Master Filter knobs applying collective adjustment and sweeping. Further to that, you can also untie each tap’s filter mode from the default Master Filter setting and switch it to any of the four modes (HP, LP, BP, Off) independently in the Filter Type page. Rolling off at 24dB/octave, Tekturon’s filter sounds fantastic, and sequencing it is a lot of fun. We would, however, prefer it if we could edit Cutoff and Resonance in the same page (a pair of colour-coded sliders on each tap, perhaps?), as jumping between two pages to access these most interdependent of parameters can get tiresome.

Additionally, the first tap of the sequence can be silenced - to prevent it clashing with the dry signal - by clicking the Mute Tap 1 button. The spacing or note value of the taps is set in the Time Grid section, either unsynced (choose a value between 1ms and 500ms  per step), or synced at 1/8, 1/16, 1/32 or 1/64, straight, dotted or triplet.

At 1/16, one pass of  the ‘sequence’ takes a bar (in 4/4 time), and at 1/64, the pattern cycles with every beat, so there’s plenty of range in terms of tap timing and tempo. The inability to set - or at least  offset - individual tap times is a sticking point, although at least swing can be applied with the Shuffle knob, which progressively lags the even numbered taps.

The timings of the feedback repeats are adjusted in the Delay page, where a multiplier of the base delay time from x1 to x16 is set per tap, and it’s here - along with the manipulation of tap levels and mutes - that the raw rhythmic magic happens. Each tap feeds into its own short processing chain, which consists of a panner, a stereo phase shifter and a multimode resonant filter.

The bipolar Pan sliders move the taps left or right, of course, while Spread (also bipolar) offsets the right or left channels by up to half the Time Grid setting, widening the signal either way. Finally, the filter is covered in Fully filtered.

Turn on the taps

Despite its easy workflow and relatively simple control scheme, Tekturon is capable of generating wonderfully elaborate and fluid filtered multitap delay lines, funky grooves, mad temporal adventures and spatialising effects, going light years beyond anything you could ever get from a regular stereo delay.

And it’s worth noting that every parameter for every tap can be not only automated in the host DAW, but also assigned a MIDI CC for performance control. The visualisation of tap output is excellent, too, with each one running a dedicated stereo volume meter behind its column on all pages of the main interface apart from, oddly, Filter Type.

As great as Tekturon is, however, it does suffer from a few minor shortcomings. Alongside the aforementioned individual tap timing/offset, distortion (oh, how we’d  like to overdrive those taps!) and delay time modulation are obvious wants; and while the multiscreen interface works really well  by and large, flipping between the eight pages gets momentarily confusing at times.

Oh, and in an ideal world, we’d have multiple DAW outputs, so we could send selected taps out to their own mixer channels for further processing. Wishlist aside, though, we appreciate that - as part of the affordable Silverline Collection - Tekturon has been deliberately kept straightforward and unintimidating, and with that in mind, D16’s powerful plugin is a resounding success, delivering  spectacular rhythmic echoes via an inspiring, immensely enjoyable interface.