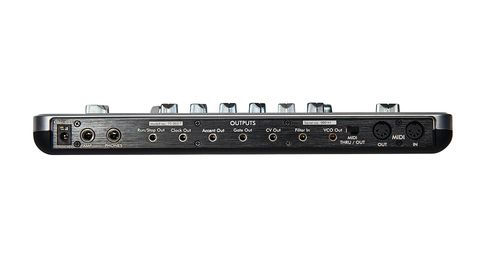 This great-sounding TB-style synth/sequencer combines authentic synthesis with an updated sequencer that doesn’t entirely lose sight of its origins.

Back in 1981, nobody could have predicted that over 35 years later a little cheap single-oscillator synth-and- sequencer combo would still provoke such interest, but such has been the fate or Roland’s TB-303 Bass Line.

Originally conceived as a basic bass accompaniment machine to partner Roland’s TR-606 drum machine, the 303 was initially embraced by early synth-pop artists, but ultimately found fame with the rise of Chicago house music, especially when some strands of its sound become harder-edged, giving rise to acid house.

Phuture’s Acid Tracks is the archetypal acid track, and makes use of only a TB-303 and a TR-707 drum machine. This was characteristic of what happens when the unit’s simple synth engine employs its single-stage decay envelope to sweep the cutoff point of its distinctive filter.

With the Resonance control pushed up, this gave the whole thing a liquid, bubbling quality that proved extremely hypnotic and alluring to Chicago’s late-night club crowd. From this point on, the 303 become entwined with dance music and has since forged its place as a classic.

Because of its classic status, prices for secondhand units have risen considerably since a low point in the late-’80s, where used 303s could be had for under £50. From the ’90s onwards, there have been a host of software and hardware ‘clones’ attempting to recreate or expand on the sound of the original.

The Cyclone Analogic TT-303 Bass Bot V2 follows on the heels of the original TT-303 (that memorably employed a replica TB-303 case and knob design). In this guise it managed to last a few years, (undergoing a significant OS update to version 2 along the way) and garner much praise for its sonic authenticity.

When testing the MkI TT-303 for the first time, it was clear by direct comparison with an original TB-303 that at points they were almost indistinguishable. The most obvious difference appeared to be in the maximum range of certain parameters, where the Cyclone version could reach slightly further in the envelope modulation and cutoff department.

It’s important to stress that, like any vintage analogue kit, no two original units sound exactly the same. Given that both the MkI and MkII TT-303’s employ surface-mount components, these small differences are to be expected. Another extremely important aspect of Cyclone’s design philosophy has been to build on the the usability of the original Roland designs, where functional breadth, in the sequencer department in particular, was somewhat lacking.

The Bass Bot MkI built on the awkward step editing of the original by adding additional pattern creation modes. User Patterns are the core stored patterns, used to create tracks or to interact with a few of the other playable modes. Confusingly, Preset Patterns are not fixed, but are created by the unit’s pattern generation system - much like a pattern spawning ground.

Although the TT-303 V2, on review here, is both cosmetically and functionally different to the first version, the version labelling is somewhat confusing. Hence the reason that we’re referring to the different hardware iterations as MkI and MkII in the main review. The main point of confusion is the fact that the first Cyclone TT-303 was updated with a new OS during its lifecycle - OS V2 - and as such you would see earlier references to the TT-303 V2. Following this logic, the new TT-303 should be V3. Yes - it’s confusing! Ultimately, the latest TT-303, whilst being less charming - or copyright infringing - in its looks, is better in the vast majority of areas.

The MkII adds a Pattern Lab Mode, which is an extension of the generated Preset Patterns, and allows more detailed control of what is generated. The Loop Edit Mode provides real-time editing of User Patterns, allowing you to add notes, and alter pitches and note modifiers (such as accents and slides) on-the-fly. The quirky Arpeggiator mode is still present, and both individual notes and patterns can be triggered via MIDI. It’s also good to now have a variable note Shuffle option built in.

In sonic terms, the MkII TT-303 remains similar to the MKI and the Roland original. The controls in the synth section are limited to Cutoff, Resonance, Envelope Modulation and Decay time, with Accent determining the difference in loudness and envelope depth between normal and accented notes. Although Bass Bot can self-calibrate its tuning, the tuning knob also remains in place.

Waveform selection is still determined by the back-panel saw/square switch. The only real disappointment this time is the lack of any parameter automation either from the internal sequencer or via MIDI. There is an argument to say that this would have gone against the 303’s hands on approach, though the option might have been welcome.

The TT-303 MkII, like its siblings the Drum Drone TT-606 and Beat Bot TT-78, has a comprehensive array of back panel connectivity options (and more to offer on this front than the MkI). Besides the Line and Headphone outs, a 3.5mm jack also outputs a pre-filter VCO signal. External audio can be processed by the Bass Bot’s 24dB/oct filter via the mini-jack Filter Input. A simple key-press ‘Filter Hold’ function helpfully negates the requirement for a Note On message to pass audio.

Though hardly cheap, the TT-303 gets you very close to the revered tones of a TB-303. This new MkII version of Cyclone’s take on the 303 is perhaps not as visually engaging as the MkI (or the Roland original), but its larger knobs and clearer panel do make it easier to use. If you’re in the market for a TB-style box, this offering should be high on your list.