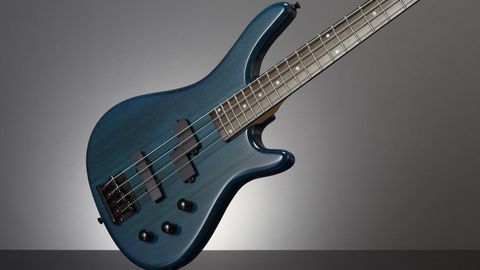 With its great range of classic sounds and competitive price, the PGB-100 is definitely worth a look.

The Rickenbacker 4001, Gibson Grabber and Höfner 500/1 Violin bass each have their deserved place in music history and, as such, have inspired countless youngsters to pick up a humble four-string and get to work. However, the most famous and inspirational of all have to be two from the Fender stable, the Precision and Jazz, introduced in 1951 and 1960 respectively. Both feature innovations that are in keeping with Leo Fender's genius and remain close to the top of any bass player's prospective shopping list.

Of course, to innovate is to inspire and the elegant PGB-100 four-string uses the best of both instruments in its modern and sleek design devoid of any dust or cobwebs. For example, the pickups comprise both a split humbucker, like the Precision, and a single coil, two of which nestle within the spec of the Jazz. Each has its own volume pot and there's a master tone control, too. The pickup bobbins are closed and topped with black plastic covers, and the mean 'n moody vibe is continued elsewhere with all-black hardware.

The slimline body is fashioned from agathis, a coniferous wood not too far removed from pine, that possesses a hearty resonance. Our example is finished a transparent blue that shows off what wood grain there is nicely. The maple neck is fairly hefty in feel without being unnecessarily overweight and the rosewood board features no less than 24 frets - a Fender American Standard Jazz is loaded with just 20 medium jumbo wires. The fret edges are smooth, overall everything has been nicely finished and, aside from a rather high action, something we cured easily enough, the bass plays and sits well.

Two distinct variations of pickup on one guitar does allow you to dial in some cool tones by balancing the volume of each one. The single coil is set closest to the bridge and, as you'd expect, gives a toppier, more honky tone. The neck-mounted humbucker is smoother and fatter. The latter has been heard in many guises on all manner of songs and can be used for rock, jazz or anything in between. Here, rolling off some of the tone can give a huge sound that's a joy to play with and is probably our favourite tone.

That said, adding in a touch of the single coil flattens the mids to a certain extent, allowing for a more subtle flavour to walking lines, while combining both pickups at full volume gives a round and angular sound that's more than the sum of its parts.

For a more aggressive response, full single coil tempered with a touch of the humbucker reacts well with an overdrive pedal or similar. We'd urge you to play around with the setting in order to discover your own sweet spot.

The only downside with a pickup array such as this is the lack of a master volume control. This makes muting the bass quickly difficult to do - you have to grab both volume pots to pull this off. However, that's the only real niggle we have and this is a cool and modern bass with more than its fair share of tones at your very fingertips. Given its modest price, you might have enough change for a case, too, and overall it's certainly worth a try.